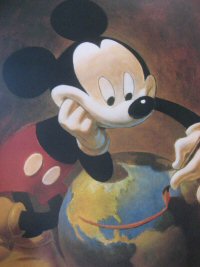 Putting a Smile on the World

It’s a large (20″ x 30″) lithograph of Paul Felix’ piece entitled “Putting a Smile on the World” that he created for Mickey’s 80th birthday anniversary in November 2008.

The package also came with a letter from Steven Clark, head of Disney’s D23 program.  It reads:

The entire D23 team hopes you’ll enjoy and cherise this warm, wonderful addition to your collection, and we once again thank you for being a part of D23 in its Charter Year.

The Certificate of Authenticity says:

Walt Disney once said “It all started with a mouse,” and ever since Mickey’s debut in 1928, he has been far more than Disney’s biggest and brightest star.  He is Disney’s goodwill ambassador to the world, representing the spirit of hope, optimism and decency that serves as the very foundation of The Walt Disney Company.

In 1953, Walt conducted a competition among his staff to select a portrait artist for Mickey’s 25th anniversary.  The winner was artist and designer John Hench who, through the years, continued to paint Mickey’s official anniversary portraits until his passing in 2004.

To celebrate Mickey’s 80th anniversary on November 18th, 2008 and continue the tradition started by John Hench, the Walt Disney Archives conducted a portrait competition among the Company’s talented artists and animators, awarding the honor to Art Director Paul Felix from Walt Disney Animation Studios.  His original portrait, entitled “Putting a Smile on the World,” is a 24 by 36 inch oil on canvas.

We warrant and guarantee that

Mickey’s 80th Anniversary Portrait:
“Putting a Smile on the World”

was printed in December 2008 as part of the Walt Disney Archives Collection and is the exclusive 2009 Charter Year collectible gift for members of D23: The Official Community for Disney Fans. 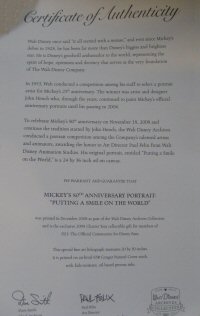