Jake Parker is an artist.

Jake Parker has taken the star of Disney/Pixar’s Cars franchise, Lightning McQueen, and cut him open lengthwise to see what makes him tick.  Basically, Jake Parker has done AN AUTOPSY ON LIGHTNING MCQUEEN.

Jake hits upon a very important point to recognize about all of Pixar’s previous works to date at the point:  everything has taken place, more or less, in a real world.  Real people, real environments.  Sure, the toys make talk when people aren’t around, but at least there are people around in the first place. 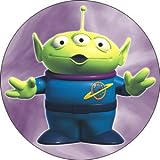 People who scream when a monster comes out of the closet.

People who discard trash for bugs to live in.

But Jake (and others, apparently, as “where do Cars come from” seems to be a more-and-more common question) has determined that cars can be their own living, breathing entities that can survive… somehow… without human involvement.

One premise is that Cars cars are merely robots, built by humans before some major plague came along and wiped everyone out… just at the moment that the cars became self-aware and self-sufficient.  Or maybe the cars killed everybody once they realized they don’t need people anymore.  As noted in the post linked above, only the cars in Cars are sentinent.

But Jake figures that Cars cars are an odd flesh/car hybrid.  Perhaps people physically turn into cars in some not-so-distant future?  In Jake’s hypothesis, the entire passenger compartment is the car’s brain.  The engine is under the hood, behind the tongue/teeth/mouth area.  The stomach is near the transmission, and the exhaust is… well, where you would expect the exhaust to be whether you’re talking about a person or a car.

But alas, Jake has not answered all the physiology of what makes up a Cars car.  He has wisely left some things for us to learn when Cars 2 makes its way to theatres a bit later.  Hopefully he will have more info after the next film comes out.  I’m a bit afraid to see what he’d make out of an autopsy of Mater…

I suppose it should be noted that Jake Parker is an artist that has worked on movies such as Horton Hears a Who. He’s also done work for Disney, Blue Sky Studios, Wizards of the Coast, and Warner Brothers, among others.  In other words, he’s a bit more knowledgable about what goes on inside animated characters’ heads than you or I would be.  If Jake says that there’s a giant brain inside of Lightning McQueen, I’d give Jake the benefit of a doubt on that and agree.  What you do is up to you.