It really shouldn’t bother Web Watch as much as it does.

But as the Chicago Sun-Times and others pointed out last year, Girl Scout cookies were getting a bit smaller, perhaps due to the recession.   There’s even a FACEBOOK page devoted to fans who want to get their 8 cookies back in the box.

But now an entire whole year has passed since, and Web Watch dutifully went to the local grocery store to buy our annual allottment of Thin Mints, Tagalongs, and Samoas from the Girl Scouts (and their parents) trying to sell off their excess inventory*.

And Web Watch can confirm that this year’s Thin Mints Economic Indicator shows that the economy is still in the gutter as the 2010 box looks to be the same as the 2009 box.  That is, in 2010 we’re still looking at a smaller box and fewer cookies. 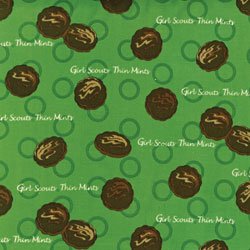 Note the size difference in the two boxes.  The 2008 box is a full 1/2″ bigger.  Aside from this, the 2008 box held 10oz of Thin Mint goodness, while this year’s box only contains 9oz of cookies.  At least the smaller box is indicative that it contains fewer cookies inside.

But that’s not all.  Let’s take a look a the nutritional difference between the 2008 Thin Mints and 2010 box.  Luckily, the “official” serving size of 4 cookies has not changed. 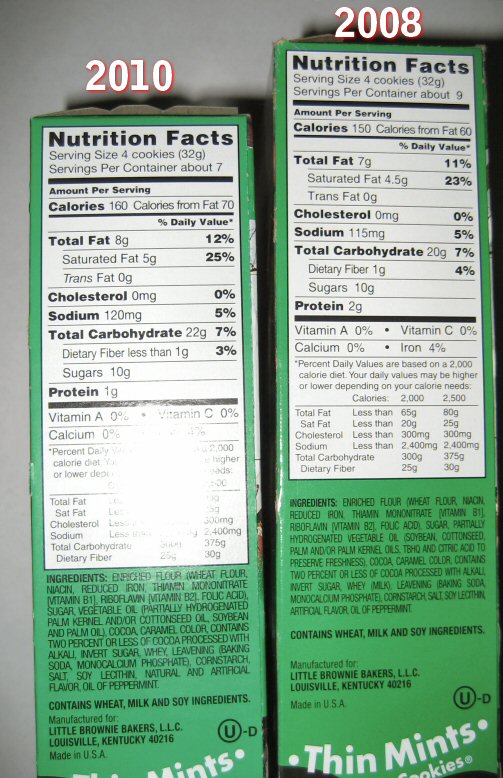 And since we already know that the smaller, 9oz box contains fewer cookies, here we can see that we have lost 2 full servings of cookies (from “about 9 servings” per 2008 box to “about 7 servings” in 2010).  Again, Web Watch will reiterate that both of these figures are wrong – “about one box” is a single serving, even with the smaller box size.

Reading the ingredient list, nothing seems to have changed from one year to another, but the formulation must have been adjusted in some manner.  Has the taste changed?  It’s hard to tell — Web Watch needs to put this box away in the freezer for safe keeping until sometime next year.  Gotta rotate the stock, you know.

So now that you know that 2010 doesn’t bring back the giant head-sized box of Thin Mints that you used to know and love, there’s always the option of trying to make a batch of Thin Mints on your own so you can have as many as you want without worrying about the box size.  And having made this recipe in the past, Web Watch can wholeheartedly recommend this TOP SECRET recipe for THIN MINTS by Todd Wilbur.

*Web Watch strongly encourages buying Girl Scout cookies this way if you don’t have friends with Girl Scout connections. If the troop has to order just one box of cookies to fulfill an order, they have to buy the entire case and try to sell the rest to others.  Sometimes the orders they receive work out to a perfect case, sometimes they don’t.  All we know is that the parents who schlep the cookies out to the grocery store each weekend until they’re gone seem happier selling these cookies than when they are forcing co-workers to sign-up for cookies at the office.