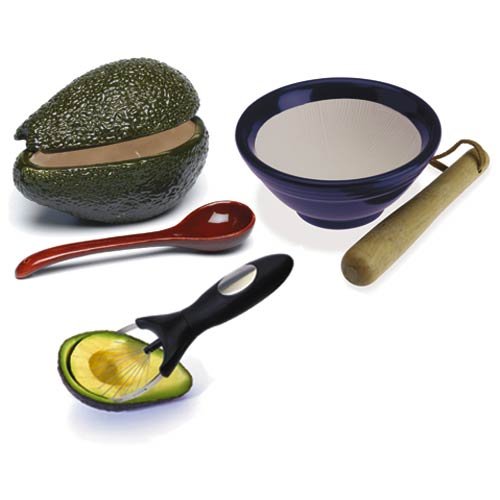 So a few weeks ago, we were watching Food Network’s BEST THINGS I EVER ATE (“Totally Unexpected”). Web Watch readers will remember this show as introducing us to Zarela’s Arroz con Crema y Poblanos, and each episode shows us some of the more interesting things that restaurants are doing with food.

In this episode, the Food Network personalities were talking about foods that they never would have though to combine that totally surprised them. So when Iron Chef Michael Symon mentioned that one of his favorite surprising foods was the Guacamole with Sage, Bacon, and Bleu Cheese from Lopez Southwestern Kitchen in Cleveland, Web Watch knew that we might have a chance of winning the competition yet again if we could take that concept and make it our own.

And we won. Here is what we came up with – enjoy!:

Summary: Award-winning recipe for Guacamole with Bacon and Blue Cheese, inspired by the Food Network

This guacamole tastes great by itself, but it is awesome when combined in steak fajitas.

But we couldn’t let a guacamole-related post get by this year without including THE GUACAMOLE SONG: