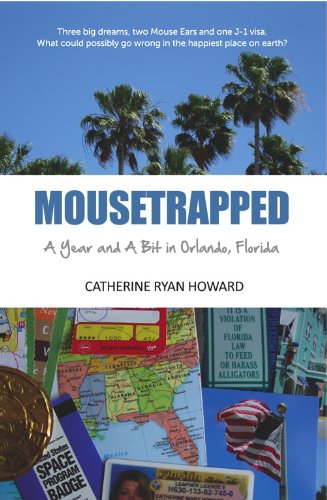 Mousetrapped: A Year and a Bit in Orlando

Web Watch has to admire people like Lisa Ray.

Lisa has strong convictions and a big stick-to-it attitude that isn’t often seen elsewhere.  She really does mean what she says, and says what she means.  Good for her.

Lisa, the founder of PARENTS FOR ETHICAL MARKETING, was upset at how the Disney corporation handled a refund request for the Baby Einstein line of early-learning DVDs.  Her reaction to those events (already documented elsewhere) led her to comment to her family, “I wish we could boycott Disney. But I don’t think we can. They’re too big.”

This got her 12-year-old daughter thinking, and she suggested that maybe they could go a year without Disney.

Lisa liked this idea so much, she decided that was exactly what she and her family were going to do: go A YEAR WITHOUT DISNEY.
Lisa already had pretty strong feelings against Disney anyway:

But the Baby Einstein item was really the last straw for Lisa.  PARENTS FOR ETHICAL MARKETING believes that companies cater too much to children in order to build a brand identity at a young age, an identity that can be carried over into the teenage or adult years.   Web Watch can’t find fault with this complaint, as we’ve mentioned in the past how hard it is to continue to embracing that Disney brand identity as one gets older.

Lisa isn’t above making assumptions to further her anti-Disney agenda, however.  In one blog post, she comments on how POOH AND MICKEY ARE DESIGNED ON CLOTHING, and that the clothes must be boys clothing based on the characters’ poses.  As Disney Consumer Products has mentioned, Disney has traditionally marketed the Pooh line primarily to mothers, with Tigger being the only one of the four major Pooh characters (Pooh, Piglet, Eeyore) to be marketed to boys and men, and the rest aimed at girls and women.  That’s one reason that there’s a Tigger golf head cover at DisneyStore.com currently, but not a Pooh or Piglet one.  While some Pooh-related clothing may be considered unisex – hey, it’s a sweatshirt, suitable for both boys and girls – we wouldn’t assume that it’s boy clothing just from lookng at it or strictly because the Bear of Little Brain is standing up with his arms folded.   If it’s more positive, gender-empowering character clothing Lisa is looking for, then she should look at merchandise for Tinker Bell or The Evil Queen, or some of the more eclectic Princess-oriented items available at TrenD.  Non-traditional messages in merchandising are available – she just has to be willing to look for it.

The LIVING WITHOUT DISNEY rules that Lisa has setup are fairly simple to follow:

Nobody said this was going to be easy for the Ray family. According to Lisa, Disney owns or are partners with a large number of synergistic companies, so their reach is pretty wide.  Lisa has a more complete list posted on her site, but Web Watch wanted to share just a few of the more well-known companies that the Rays will be avoiding for the next year:

The Ray family is already two months into the project, and it seems to be working for them so far.  We wish them luck in making it through the whole year.  We know that we wouldn’t be able to do it.

Who knows? Maybe when it’s all over, somebody will come up to them and say:

(cue music)
“Hey, Ray Family!  You’ve gone a year without having a major media company contribute to or influence your life.  What are you going to do next?” — “We’re going to Disney World!”

That really would be an awesome commercial, wouldn’t it?

2011 UPDATE:  Web Watch wanted to be sure that we included an epilogue to the Ray family story, in how they fared with their YEAR WITHOUT DISNEY.

So after a full year of avoiding everything Disney, they ended up doing fairly well for themselves.  They only “did Disney” twice in the year — once, to see the movie TOY STORY, and the second when they inadvertently bought a loaf of bread that contained Disney branding on it.

Not a bad effort.