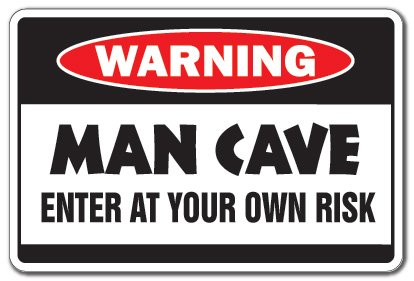 Man Cave: Enter at Your Own Risk

There are some phrases that Web Watch just can’t stand hearing anymore.

And we’re not alone about some phrases driving people bonkers:  Ian Hare wrote about NOT LIKING THE WORD “VAJAYJAY” either.

Look, we’re all adults here.  Why sugarcoat these terms into things that are not what they seem?

Take “Mancave” for example.  A basement or garage all decked out with entertainment such as a pool table, pinball machines, dart board, poker table, or a 12′ TV with all the video game essentials is NOT a place that should be exclusive for men.   If the guy is single, his entire bachelor pad could be considered a “Man Cave”, unless he’s had his mom or former girlfriends/wives help decorate it for him.

And if the guy is married or in a live-in relationship, he’s not taking sole ownership of that part of the house without some sort of direct approval to do so by the women in his life… because they know that those parts of the house will become Party Central for everyone – not just the men.

Think about how offended women would be if we called the kitchen, laundry room, or arts-and-crafts spaces “The Dainty Spot”.  It ain’t going to fly.

There’s nothing wrong with having a space dedicated to stuff that guys like — but don’t be surprised when it’s not a guys-only club in attendance.

Which brings us to our next set of phrases:  “Baby Mamma” and “Baby Daddy”.

Saying “Baby Daddy” makes the person saying it sound uneducated and misinformed about how exactly the baby’s conception took place.  And if it surrounds the fact that the baby-making couple weren’t married, then why aren’t we hearing that God is Jesus’ Baby Daddy in today’s church literature?   It’s time to add “Baby Daddy” to the do-not-use pile.

Which brings us to Ian Hare’s article about how he feels about pubic landscaping and brazilian waxing.  He says that “if anyone, man or woman, used the term ‘vajayjay’ in a conversation with me, I’d be looking for their doctor or caregiver.”  He says this while acknowledging that “vajazzle” may be an acceptable term for genitalia decorating….even if he’s never heard a woman actually use the term themselves.

Web Watch is all for euphemisms, and we laugh about how common it is to hear the word “boob” in everyday media today when it was considered inappropriate usage in the fairly recent past.  Heck, “boob” wasn’t even a sexually-oriented word until 1949.  So should we be scared that while “boob” has entered into acceptable everyday conversation appropriate for families that one day we’ll be using “vajayjay” as well, just because the word “vagina” should be uttered only in hushed tones behind closed doors?   Don’t get us started on variations on the term, like “man boobs” or “moobs”, or “manscaping” which are all equally stupid sounding.  Both sexes have ’em, so why the need to differentiate the term?  Stupid, stupid, stupid.

C’mon people – we all know what we’re talking about.  So why not just say the damn words, say what you mean, and get on with it.