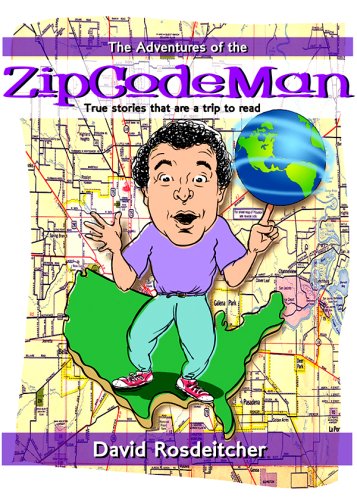 The Adventures of the Zip Code Man

David Rosdeitcher has an affinity for numbers, or just a really good memory. He is a street performer from Boulder, Colorado, and his act consists of asking the audience for their zip code.  He then proceeds to tell those people not only what city they’re from, but also about a restaurant or other local point of interest that’s located there.

As a busker, he earns money based on the tips that people provide from the entertainment he offers.  His pitch line is “give me money, because I know where you live.”  It seems to be effective.

David started off as a juggler, and as a self-professed “map freak”, he not only was able to travel everywhere across the country to perform, it also gave himself the opportunity to visit all those little dots on the map and learn a little bit about each town he visited.  He says that there is a process to the ZIP Code madness that makes it easier to memorize the ZIP Codes across the country – for example, ZIPs are lower numbers in the East, and higher numbers in the West.

There are also more interesting ZIP Codes that tend to stick out in the minds of those who are interested in numbers – knowing these makes it easier to narrow down a given ZIP into a specific part of the country:

In an interview for D23, Disneyland Resort President George Kalogridis was asked about his favorite “streetmosphere” performers at Disney.  George replied that his all-time favorite was Zip Code Man:

This guy was called Zip Code Man, and he was so good that I remember bringing him to a steering committee meeting. He was what I think you would call a savant. You had to give him a couple of hints and he would tell you your zip code. He would not only tell you your zip code, he would tell you a place in that zip code that the chances were pretty strong that you would have known, like a pizza place or something like that. It was just unbelievable. He would attract this audience and guests were just in awe. It was quite special.

Unfortunately for Mr Kalogridis’ favorite act, it ends up that the Mighty Zip Code Man’s tenure as a Disney street performer in 1996 was to be short-lived.  After just six months of performing at Epcot, he was fired “over a couple of Mickey Mouse misunderstandings”.   Even so, if 15 years later George Kalogridis still thinks it’s the most entertaining street act he’s ever seen, it just goes to show you how amazing David Rosdeitcher is with rattling off ZIP Codes.

Since David started performing his savant-like ability to recall places and ZIP Codes in 1992 as part of his juggling routine, his act has expanded beyond the United States into mail codes for other countries around the world.  He’s been recognized by the Guinness Book of World Records as being able to recall the most randomly selected ZIP Codes at one time.

And yes, Zip Code Man is on Twitter and LinkedIn

One reply on “Meet David Rosdeitcher – The Zip Code Man”