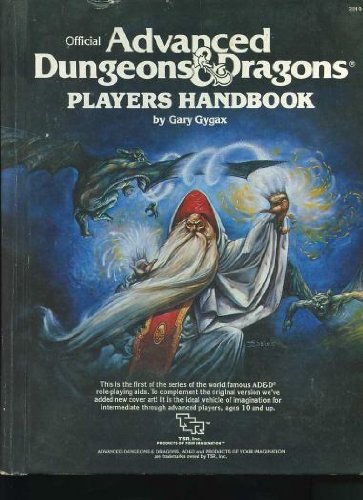 Web Watch went to school with a bunch of nerds.

Granted, today’s economy is run by nerds – and considering how many people are sucked into wasting their time on Facebook and Twitter, it looks like the nerds did get their revenge.

Except back then, nerds weren’t just computer-oriented folk.  Sometimes, those same kids would wander out of the computer lab and into broad daylight – proudly holding their DUNGEONS AND DRAGONS PLAYERS GUIDE, MONSTERS MANUAL, or 20-SIDED DICE as they shuffled off to their next D&D encounter.

Yes, it was those Gary Gygax books that had the nerds identified to the whole school.  Nobody understood what possessed those kids to escape into a fantasy world where they could be anything they wanted to be, and be successful doing it.   Creating fake online dating profiles hadn’t even been invented yet — these kids were obviously well ahead of their time.

(In the spirit of full disclosure: Web Watch may have borrowed one or two of these books on occasion ourselves…but we never owned one.  While we enjoyed playing D&D with our friends, we weren’t obsessive about it like THEY were.  So yes, we probably were a nerd too.  Probably still are.)

But when it came time for putting together a game for the gang, the DUNGEON MASTER (“DM”) or GAME MASTER (“GM”) would spend countless hours in creating a complex setting with a town, castle, dungeon, or forest — populating it with various monsters, traps, and treasures.  Creating a challenging environment for all of us to escape with our characters as we raised havoc across Middle Earth (or wherever our D&D journey took us).

Sometimes, the DM would buy someone else’s complete dungeon scenario where all the work was done for them.  But really, who wants to pay money for something that can be done for free with the vast resources of the Internet available?

Take a look at THE ADVENTURE GENERATOR!

The Adventure Generator is a one-click stop for any DM worth their salt to generate a D&D adventure for any level of adventurers, including a map, room descriptions, monster locations, and treasure amounts.  Some of the titles that Web Watch has generated include:

Each generated map has up to 70 or more different rooms to explore, and since generating a new one is as easy as clicking, you really have an unlimited amount of options available to you and your plundering party.

Just make sure that Leeroy Jenkins is part of your group, and you’ll be fine.