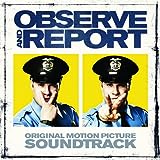 Observe and Report is about your typical gung-ho mall cop (Seth Rogan) who sees himself taking his job a bit more serious than most in his career path of choice.  He’s good at what he does, but wants more.   The audience roots for Rogan throughout, cheering his successes as much as feeling his pain as he works towards his goals.

In the end, I left the film happy, and pleased with the film’s resolution (compared to other films that leave you wanting more or wondering what the characters’ next steps are going to be).

In some ways, you might lean towards making comparisons between OaR and HOT FUZZ, as the themes are similar:

The sheer amount of junk flapping around in the breeze might be where the similarities with Hot Fuzz end.

The film clocks in at a spiffy 90 minutes, and I found it entertaining throughout – a number of good whole-audience laughs to be had here.  The action scenes were fun, the dialogue was witty, and the situations were amusing enough to wonder what was left on the cutting room floor.  I can only imagine what is going to appear on the inevitable “completely uncensored” DVD version.

An added bonus:  the trailer for THE HANGOVER that preceded the film was awesome.  Really looking forward to that one; I hope all the good jokes didn’t make it into that trailer.