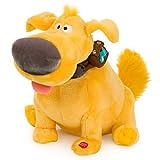 Pixar’s 10th film, UP, is three different films all rolled into one.

At its core, UP is a beautiful, poignant love story about a man (Carl Fredricksen) who just wants to keep a decades-old promise to his wife Ellie that they will live a life of adventure in South America.  Anyone who has dreams and aspirations with a loved one, only to have to set those aside at times, will really appreciate this aspect of the film.UP is also a buddy comedy, as 78-year-old Carl has to team up with 8-year-old Wilderness Explorer Russell (who only wants to earn his final merit badge, “Assisting the Elderly”) to survive on a surprise adventure, along with having to deal with a floating house and various creatures that Russell befriends along the way.

And finally, UP is an action film with fight sequences and chase scenes that will bring you to the edge of your seat as you wonder what could possibly happen next.  Yes, UP has a little something for everyone to enjoy, and continues Pixar’s unprecedented run of 10 high-quality films in a row.

The first ten minutes set the emotional tone of the film, and the closing scenes offer a nice matching bookend to the story.  UP is Pixar’s most emotional film to date, and overall the film is satisfying in how the story unfolds, then wraps up neatly.  If you are so inclined, you may want to bring a tissue or two with you.

As is frequently the case, the sidekicks steal the show.  As Rhino the Hamster did with BOLT, Dug the Talking Dog (“squirrel!”) is used for maximum comedic effect, and hopefully will have his own segment on the forthcoming DVD.  I mean, come on – it’s a talking dog!   What’s not to love? Russell is no slouch in the comedy department either, and anyone who has travelled with an overtired eight-year-old will appreciate the humor here as well.

UP is rated PG, and deals with themes (death, sorrow, regret) that are not often seen in films that expect a younger audience to be in attendence. Because these themes are not sugarcoated and are vital to the storyline, some parents may want to reconsider how young a child they should bring to see UP.   Your own situation may vary, but there were many younger children in my theatre (aged 3-5) who became vocally upset during certain scenes and needed to be taken out of the theatre for a few minutes.  Older children, ages 8-10, will be better prepared to sit through and understand those sections of the film.

At UP‘s premiere at Cannes, Pixar’s John Lasseter quoted Walt Disney’s philosophy of “for every laugh, there should be a tear”. The scary scenes in Pinocchio, the Wicked Queen in Snow White, the wildebeest scene in The Lion King all have proven this adage in the past, and UP is no exception with presenting some emotional scenes that lay the groundwork for Carl’s motivation to float away to South America.  Just as in early preview screenings last year, the press at the Cannes premiere were not immune to being moved as many sniffles were heard at some of the film’s more emotional moments.

Remember analyst Richard Greenfield?  He’s the one who said that UP was going to cause some financial issues for Disney, based on what he saw of the film at ComicCon back in February.  Most of his comments had to do with monetizing the characters and generating repeat visits to the theatre.  Considering how enthralled the youngsters in the crowd that I saw the film with was, it appears that his initial concerns may be moot.

At this point in the year, it is too early to begin calling for entries to the Best Picture Oscar race.  But considering how the Academy snubbed WALL-E at last year’s Oscars, this could be the Academy’s chance to redeem themselves and put UP on the Best Picture ballot.  Let’s hope the Academy finally does the right thing and begins to nominate films, not based on presentation style (animated vs live-action), but on whether the film succeeds in connecting and resonating with its audience to the same level that UP does.

Other early reviews have agreed with this sentiment, already calling UP “Pixar’s most deeply emotional work”, and “as of May, the best film of the year”.

For the Pixar fans, I did spot the Pizza Planet truck and the Luxo ball makes an obvious appearance.  More Pixar references will be pointed out soon by more eagle-eyed people, I’m sure.

The closing credits artwork is beautifully done.  There are no post-credit scenes, but Disney and Pixar fans should make it a point to sit through and see the film’s dedication at the end of the credits.