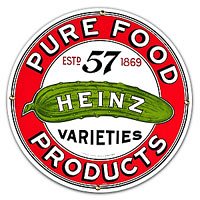 You’ve even had Heinz 57 sauce on your Cheeseburger in Paradise, along with some lettuce and tomato and french-fried potato.

But can you name the other 56 Heinz varieties?

According to THE STRAIGHT DOPE, at one point there were not just 57 varieties, but over 1,300!   Henry J. Heinz just thought that “57 Varieites” was an interesting marketing slogan.

But there must be some truth to the matter, as at one point HEINZ PUBLISHED AN ADVERTISEMENT SPECIFICALLY LISTING THEIR 57 VARIETIES.

Because Web Watch like to help, here are just ten of the listed 57 varieties you may have missed out on: