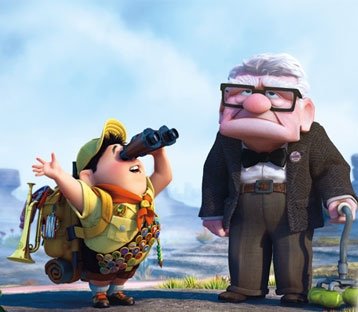 Details are starting to emerge about the upcoming exclusive screening for D23 members of Disney-Pixar’s latest film, UP.

All you have to do, it seems, other than have your Disney D23 membership card at the ready – is to go to the El Capitan Theater in Hollywood, California for the special showing on Thursday morning May 28th, at 12:01am.

Of course, further details are scarce about whether there is going to be any actual D23 preview ticket distribution or similar, in order to control the massive crowd that is sure to show up for this fantastic D23 benefit.

What would have made more sense would be for the Disney-Pixar marketing department to send preview screening passes to all D23 members across the country via the local Disney movie marketing affiliates.  Disney already has our street and email contact information — it would be a relatively easy task to cross-reference that data with setting up local D23 free screenings within x miles of each large grouping of members.  That way, Disney isn’t catering D23 exclusively to the local Los Angeles-area fanbase, but to the “community” of fans that they’re trying to build around the world with D23.

On the flip side, let’s suppose that there is such a large concentration of D23 members in Southern California compared to the rest of the country that having a screening at the El Capitan just for D23 members really is a great idea.  In that case, then you still can mail out screening passes to the D23 members across the country to attend a standard (non-exclusive to D23) preview screening, as that number would be relatively small and easily handled.

Why movie screening passes to a local screenings weren’t considered as an instant add-on to the D23 experience is beyond me.  It doesn’t cost Disney that much additional money, as the screenings would probably be held anyway – and it’s a faithful expressive fanbase that is eager to spread the word of the Next Great Film.

I know that this was just the first exclusive film screening that D23 has tried to put together.  There will be plenty more to come over the years.  Let’s hope they do the next ones the right way and invite all D23 members, not just those who can afford the airfare to sunny California.