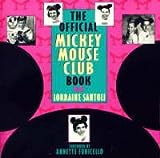 Those of you who follow Disney business news are already aware of Disney’s new fan club, D23.

For those of you who don’t follow the business side of the Disney company, D23 is something that the Disney marketers have put together to compete in the value-added, information marketplace that was left with a giant void when the various Disney Club, Magic Kingdom Card, Disney Magazine, and other promotional programs closed down.  They’re calling D23 a “fan community”.

For $75 a year, D23 members get 4 glossy, high-quality magazines a year, along with some extra doodads and opportunities.  Other websites have done a wonderful job dissecting the D23 program announcements, so it is unnecessary to repeat the bulk of the details here.

Suffice it to say, the general consensus across the Disney fan sites is that…

Which brings me to the extras:  while the program has only been live for a short while, there may be plans afoot to really make being a member worthwhile… especially if D23 keeps up exclusive, member-only opportunities.

Opportunities such as the just-announced, still-being-figured-out, D23-only screening of UP.   Let’s hope they do this nationwide in major markets as opposed to only in Anaheim, New York, or Orlando.  If they make exclusive screenings too exclusive, members will leave D23 in droves when it comes time for renewals.  Time will tell if the people behind D23 have what it takes to win back the Disney fans who have left for other information sources.  They’ve proven that limiting shopping options turns fans away, so hopefully D23 will not repeat those mistakes.

Still, this is a step in the right direction.  I’m more than happy to pay a few extra dollars a year for the magazines in order to see advance exclusive screenings of UP, Toy Story 3, Cars 2, or whatever else Disney decides to throw to the members.

As long as D23 remembers that there is a mature, intelligent market that is willing to buy into the program and continues to keep adding value and features to it, D23 should succeed.  We may not all buy an exclusive $800 pen, but $75 for some level of special treatment is certainly within reach.

Let’s hope that this is an ongoing product, and not something that will be taken off the market in six months before it has a chance to prove itself.

I’d just like to mention my magazine as an alternative as well.
Orlando Attractions Magazine – http://www.attractionsmagazine.com