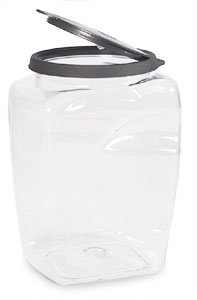 Web Watch was at a friend’s house the other day when we noticed a lineup of jars along the kitchen counter, each one decorated with one of their children’s names.  Inside the jars were various amounts of glass beads, found at your local arts-and-crafts store.

We had to ask – what’s up with the jars?

It turns out that these were ALLOWANCE JARS, used to help teach their kids about working for money and saving money.

Let’s be clear – most allowance jar setups are completely money-based, where the children receive an allowance for doing their weekly chores, and then the children get to decide how much money to put into a “spending jar”, a “savings jar”, and a “sharing jar”…. with the “spending jar” being the smallest of the three.

Our friends’ jars didn’t contain any money – they only contained beads (and each child’s bead count was different, with some jars containing more beads than others).

What our friends showed us was their childrens’ job chart.  According to the chart, a child would receive a certain number of beads in their jar for each task completed.  Taking out the garbage each week?  That was worth 5 beads.  Emptying the dishwasher was worth 2 beads.  Vacuuming the house was a solid 10 beads.  And since parenting is more of a dictatorship than a democracy, if a child misbehaved then the parent could take any number of beads out of the jar as a punishment.

Once a jar was full, the child would trade the full jar for $20 and they’d start all over again trying to fill their jars.   Following along with other parenting tips, that $20 would immediately be allocated into a “Save Now”, “Spend Now” and “Our Next Disney Trip” piggy banks in an appropriate allocation (we recall that it was 50% for savings and a 40%/10% split on the other, but we will leave the actual money division for our Web Watch readers to decide what’s good for their own situations).

The pros of a system like this are many, especially if you have more than one child.  Parents who try this will see their children get competitive in earning beads before their siblings get the chance to do so.  When this occurs, parents may need to use beads for additional rewards beyond simply completing jobs around the house.  Perhaps an A on any test is worth 10 beads as well, but an F or a D results in losing beads from a jar.  As our friends pointed out – the possibility of losing beads is a phenomenal motivator for encouraging good behavior.

One thing to keep an eye on is whether the jars are filling up quickly enough to encourage your children to keep working towards their full jar.  Our friends had to adjust their bead reward levels upwards, as their original job chart was much too stingy with putting beads in the allowance jars and getting them to fill at a reasonable speed.  One thought they had was to vary the game with some larger beads to fill the jars faster, but they found that merely changing the reward levels was enough.

Web Watch doesn’t think it is necessary to mention that only the parents can put beads in the jars — we asked if they thought the children would cheat, and they said that while it’s possible, punishment when caught would be to lose the entire jar’s contents and having to start over.  Plus, they kept a pretty good eye on where the bead levels were every day anyway, since the jars were decorated in such a way to allow for a quick visual level check.

In their experience, it took a little more than a month of solid work by their leading bead-earning child to fill their jar and earn $20, which works out to be about $5 a week.  As their children get older, they’re planning on increasing the cash-in rate for the jar from $20 to $50 (or more).

Don’t want to use beads or jars?  You can make allowance coupon books, using stickers as rewards similar to S&H Green Stamps of the past.  Or maybe use allowance sticks where you make notches or colors to show progress.

No matter what approach you take as a parent, the point is that a visual representation of jobs done (and the effect that misbehaving has on their livelihood) helps motivate children to do more work for the rewards that they’ll get in the end.  Such as getting to go to Disney that much sooner.

Even though I prefer the geeky online “Virtual Family Bank” approach to managing the kid’s money, I gotta say I dig the visual and tactile approach with the glass bead jars that you describe here.

I suppose you could always use the two approaches together – making the deposit in the online bank of Mom&Dad periodically when the jars fill up.