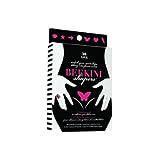 Ladies – here’s a research paper that you might want to read before you go to the spa for your next wax job: SEVERE COMPLICATIONS OF A “BRAZILIAN” BIKINI WAX.

If your waxing goes awry, and it could happen, you could find yourself facing all sorts of nasty complications.  The study focused on a 20-year-old Australian woman who had a Brazilian wax, but then started suffering from fever, swelling genitalia, and “copious vaginal discharge” in the days following.  She didn’t seek medical attention until another week had passed.  By the time she reached the ER, she was in so much pain due to the swelling, that she was unable to pee.

In the end, she was diagnosed with streptococcal cellulitis and toxic shock syndrome, along with an active herpes simplex virus type 1 infection.  The patient received antibiotics and antivirals, and she left the hospital 10 days later.

Six months later, the patient tried shaving instead of waxing; she had to return to the hospital as the herpes and cellulitis returned. She was treated with valaciclovir and penicillin, and released.

This patient’s situation aside, the study mentions that burns and skin infections are other risks commonly associated with waxing, due to either skin irritations or contaminated waxing procedures.

“But,” I hear you cry, “isn’t there anything good that can come from getting a Brazilian bikini wax?”

On the bright side, the scientists performing the study also determined that while an increase in Brazilian waxing in the UK between 1997 and 2003 may have led to more cases of gonorrhoea and chlamydia, it also led to a reduction in the number of pubic lice cases being reported as well.

Chlamydia instead of lice?  Who wouldn’t want to make that trade?

2 thoughts on “Can a Brazilian Bikini Wax Kill You?”