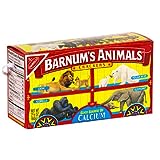 Animal crackers (such as the familiar red circus train-themed box of Barnum’s Animals that we all know and love) have been around for more than a century.  Here are 10 things you may not know about them: