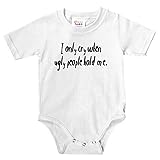 A new study published in the Public Library of Science by McLean Hospital and Harvard Medical School entitled GENDER DIFFERENCES IN THE MOTIVATIONAL PROCESSING OF BABIES ARE DETERMINED BY THEIR FACIAL ATTRACTIVENESS concludes what all new mothers are afraid to hear:  that AN UGLY BABY IS HARDER TO LOVE.

The study set out to clarify an Israeli study that showed 70% of abused or abandoned children had some sort of visible flaw – but no other health or learning issues by determining “why”.

In the study, men and women were shown 80 images of baby faces.  50 of those images were of normal infant faces, while 30 of the images were of babies that had a noticable facial defect, such as those caused by a cleft palate or fetal alcohol syndrome.

Both men and women ranked the unattractive babies similarly.  However, while both men and women viewed the normal images for approximately the same amount of time, women were significantly quicker to move to the next image when presented with a photo of an abnormal infant face.

The conclusions raised by the women participant’s reactions to quickly move on from viewing the unattractive images vary.  The statistics showed that women were more likely than men to reject the unattractive-looking babies.

But why?  Are women more attuned to what social hardships an ugly baby may have growing up, affecting their initial feelings upon seeing those photos?    The study does show that women are more interested in raising healthy babies, and are more prone to reject unattractive children.

Those running the study agree that more work and analysis needs to be done before reaching a hard conclusion.

One thing those running the study do agree on is that there is some significant information to look at, and that the study did not take into account whether the child was the participant’s own.