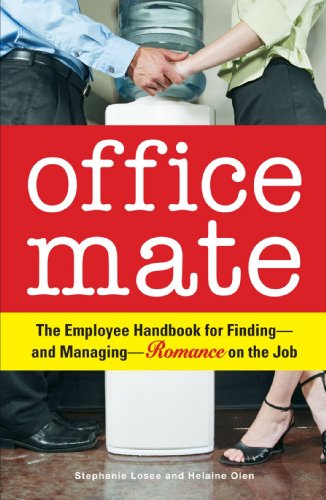 Office Mate – Your Guide to Romance at the Office

And by “sleeping with a co-worker”, we mean “share a hotel room with while on a business trip”.

One occasion was due to a winter business trip that required a cross-country flight through a few major snow storms — resulting in delayed… then diverted flights into an overnight stay in a city with very few available hotel rooms.  Luckily, our travel department found an Embassy Suites with one room available – and it allowed for all parties involved to have their own bit of privacy until the next day’s flight.

Another was just a situation where there were more people than available rooms, and everyone in the group was bunked up with another.  Luckily, our hotel buddy decided to hook up with someone they had just met earlier that day, so Web Watch ended up having the entire room to ourselves all night.   I suppose that this one didn’t officially count as sharing a room, but it could have been, so we’ll count it.

In any case, both of these were perfectly good, legitimate business-oriented reasons for co-workers to share a hotel room.   And it ends up that Web Watch was just at the beginning of this new trend in business travel.

According to a SURVEY OF BUSINESS TRAVELERS REGARDING HOW BUSINESSES ARE CUTTING BACK ON TRAVEL EXPENSES commissioned by the aforementioned Embassy Suites, 71% of those surveys said that they have changed their travel habits due to the current economic situation.

Some of the examples given were:

See that 17% trying to share a co-worker’s room?  Here’s how that one is going to break down, given enough time:

ACCORDING TO CAREERBUILDER.COM, 37% of employees out there have dated a co-worker, and 32% of them ended up getting married.   12% of workers said that their romance began outside of the office itself, with some of the more common locations being happy hour, working late at the office, the company holiday party, and… on a business trip.