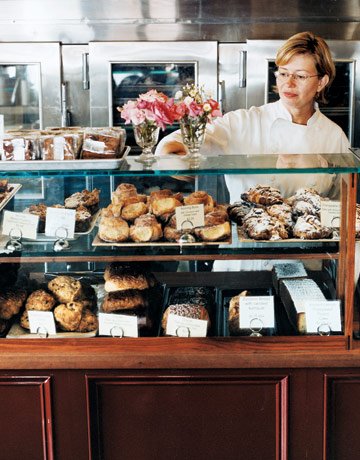 Web Watch is a big fan of pastries, donuts, and other baked goods.

We’ve been known to travel out of our way to eat at RESTAURANTS THAT EMPLOY THE TOP PASTRY CHEFS IN THE COUNTRY.

And now, according to DESSERT PROFESSIONAL MAGAZINE, we just need to head down to our local doughnut shop, no matter where we are in the world.

That’s because one of  the winners of the 17th ANNUAL TOP PASTRY CHEF IN AMERICA competition is Christopher Boos of Dunkin’ Brands.

Christopher Boos, named one of the ten best pastry chef in Amercia, essentially works in a donut shop.   No wonder Homer Simpson is proud of his donut fetish.  Donuts are nothing to be ashamed of.

But donuts are not the only pastry that Boos knows how to make.  For the competition, Boos’ featured dessert was a milk chocolate jasmine tea tart, Baskin-Robbins cranberry sorbet with soaked cherries and a Dunkin’ Dark Roast coffee crème.  Of course – just the type of thing you’d find down at the local coffee shop.

Or at least, if we keep our fingers crossed, not yet.  Web Watch can hope, right?

Who were the other TOP TEN PASTRY CHEFS IN AMERICA?  Here’s who made the list along with Boos:

For those of you interested, Dunkin Brands issued a press release honoring Boos’ achievement.  It’s posted after the break.

Dessert Professional Magazine, the leading publication of the pastry, ice cream and chocolate industries, has recognized Dunkin’ Brands’ Executive Pastry Chef Christopher Boos as one of the top ten pastry chefs of 2010. Dessert Professional honored Boos at a reception at the Institute of Culinary Education in New York City, NY on June 7. Other prestigious pastry chefs honored included Steve Evetts of the Marriot Marquis Hotel in New York City, NY; Yannis Janssens of the Fontainebleau in Miami Beach, FL; Nicholas Lodge of the French Pastry School in Chicago, IL and Roy Pell from The Phoenician in Scottsdale, AZ.

The event featured an award ceremony that recognized these chefs as the best in the nation, and was followed by a walk-around tasting of desserts created by the ten honored chefs. Boos created a magnificent dessert consisting of a milk chocolate jasmine tea tart, Baskin-Robbins cranberry sorbet with soaked cherries and a Dunkin’ Dark Roast coffee creme.

“With more and more remarkable talent filling the ranks of dessert professionals, being recognized as one of best has gained a new level of prestige,” said Dessert Professional Editor Matthew Stevens. “We set out to recognize outstanding chefs who elevate the industry as a whole with their contributions in talent, innovation, and community service. These are the chefs who have proven they most embody the spirit of excellence and hospitality to which we are all committed.”

“I am truly honored and humbled to be named one of the ten best pastry chefs in America, and to be in the company of these esteemed chefs,” commented Boos. “This award is one of the great highlights of my career.”

Throughout a 25-year career dedicated solely to pastry creations, Boos has established himself as one of the country’s premier pastry chefs and an imaginative architect of award-winning desserts. Since 2004, Boos has brought his exceptional experience and artistry to Dunkin’ Brands where he has worked to create innovative new menu items for Baskin-Robbins and Dunkin’ Donuts – while sharing his knowledge of pastry design and preparation with Dunkin’ Brands’ culinary team and franchise owners throughout the world. In his time as Dunkin’ Brands Executive Pastry Chef, he has been instrumental in the oversight and development of a number of new and innovative products for both Baskin-Robbins and Dunkin’ Donuts, including cakes, ice cream treats, pastries, sweet snacks, and bakery items.

“As Executive Pastry Chef, Christopher brings exceptional experience and artistry to Dunkin’ Brands, and inspires our entire team each and every day to conceive new and innovative creations for our customers,” said Stan Frankenthaler, Executive Chef for Dunkin’ Brands. “We could not be more proud to see Dessert Professional recognize Christopher for his skills and creativity, and we salute our friend and colleague for his accomplishment.”

Boos has been honored with numerous awards throughout his career, including eight Gold Medals from the International Hotel / Motel & Restaurant Show in New York City for Pulled Sugar Presentations, Cake Presentations and Chocolate Showpiece Presentations. He also received the Medal of the French Government Grand Prize of The Salon for Full Pastry Presentation. In 2001, the American Culinary Federation’s Mid-Hudson Chapter named Boos as its Chef of the Year. Most recently, Boos was a member of the United States national team at the 2009 Coupe de Monde World Pastry Cup.

One reply on “One of the top pastry chefs in America works at Dunkin’ Donuts? We’ll take a dozen, now!”

At least Boos is getting the respect he deserves! Cheers, great info, and I am now craving a milk chocolate jasmine tea tart.