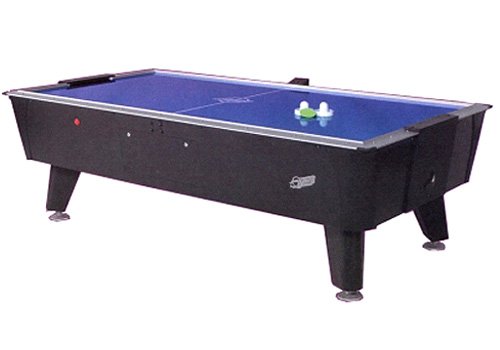 The only sanctioning body for competitive air hockey, the UNITED STATES AIR HOCKEY ASSOCIATION, has been hosting air hockey tournaments for over 30 years.

How serious do real air hockey players take their sport?  Here are some of the OFFICIAL AIR HOCKEY RULES that you may not already be aware of.

Web Watch will admit that we always thought that “topping” was a valid air hockey play.  We stand corrected.

The 2010 Air Hockey World Championship press release after the break.

Zwack, the national shot of Hungary, is excited to announce that the best of the best air hockey players will compete at the 2010 Zwack Air Hockey World Championships July 15-18, 2010 in Houston.

The 2010 Zwack Air Hockey World Championships, open to both amateurs and experts, will feature 16 Valley-Dynamo air hockey tables and competitions for doubles and single team play.

“Together with Texas Air Hockey Group, AirHockeyWorld.com and support from Major League Air Hockey, we expect the largest crowd in the event’s 32 year history,” said Seth Yassky, Zwack Brand Manager for Diageo.  “We are pleased to introduce Zwack to the air hockey community, and look forward to responsibly celebrating the best players in the world.”

Sanctioned as an international level event by the United States Airhockey Association (USAA), all competitions will take place at SRO Sports Bar and Cafe in Houston. Since its inception in 1975, the USAA has sanctioned championship air hockey each year, crowning 12 different champions over 30 years. The USAA remains at present the only recognized worldwide player organization for Air Hockey.