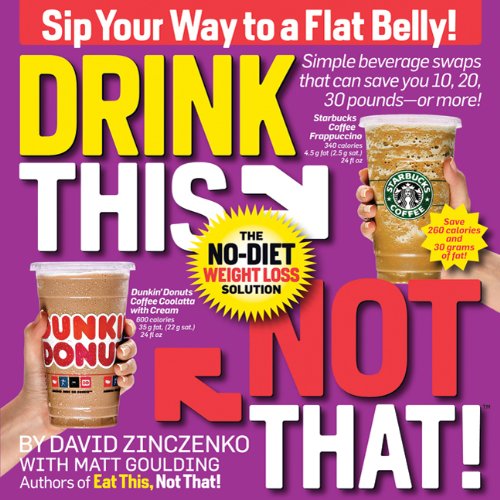 Drink This, Not That!

Web Watch has always been a fan of the EAT THIS, NOT THAT series of books from Men’s Health, which boil down dieting and weight-loss to one simple task:  you may not be exercising as much as you want to, and you may not be eating as healthy as you would like to — but making the right choices in eating can help offset the lack of exercise.

Remember, gaining and losing weight is paritally to do with the number and type of calories and fat that you take in.  So change your meals, and even if you do nothing else – you should lose some weight simply by eating better.

The premise of their latest book, DRINK THIS, NOT THAT concentrates specifically on beverages, and what you should substitute when you go out for a drink.  Not a lot has changed between the 2009 DRINKS YOU SHOULD DRINK, AND DRINKS THAT YOU SHOULDN’T and the 2010 LIST OF DRINK THIS, NOT THAT CONTENDERS, so let’s take a look at some of what’s listed in their HALL OF SHAME:

The best advice that DRINK THIS, NOT THAT has for its readers comes from their description of the WORST BOTTLED BEVERAGE: “don’t buy products with cartoon animals on the front“.  Even if you stick with just this one suggestion on everything you eat, and you should be losing weight in no time.