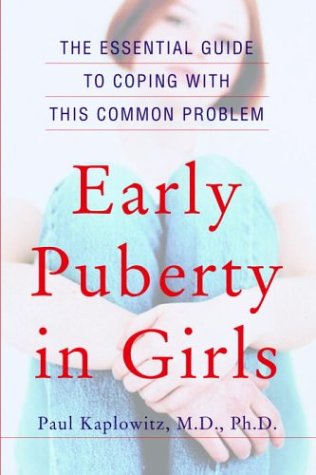 Early Puberty in Girls: The Essential Guide to Coping with This Common Problem

The news has been filled with all sorts of reasons and explanations for why young girls are entering puberty at younger and younger ages these days.

CNN reported that “Early development in girls has been linked with poor self-esteem, eating disorders, and depression, as well as cigarette and alcohol use and earlier sexual activity,” with other news reports stating that girls are entering puberty before they reach the ages of 9 or 10.  Sometimes, puberty can be triggered from an injury or a brain tumor that kickstarts the body’s processing.

But a study to be published in the JOURNAL OF ADOLESCENT HEALTH may have uncovered some additional puberty-triggering criteria that parents should be aware of.  The main focus of the study about what would TRIGGER PREMATURE PUBERTY IN GIRLS was to investigate whether environmental factors in the way the girl was raised had any effect.

What the researchers thought they would find was that girls who came from lower-income families would enter puberty earlier.  On the contrary, research showed that it was girls from higher-income earning families ($50,000 or more) and without a biological father living with them, were more likely to enter puberty earlier than not.

Some of the reasons hypothesized for these findings are better nutrition, increase exposure to artificial lighting from TV or computer screens, use of more beauty products or exposure to chemicals not found in lower-income households.

If it matters, other puberty-related studies have also found the following: