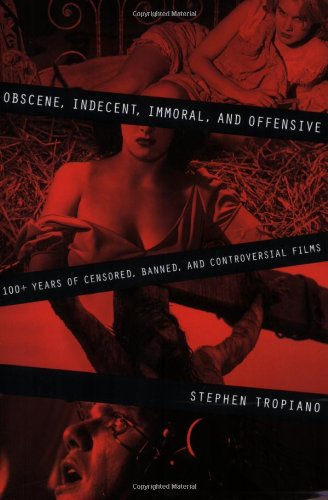 Not everyone is a fan of censorship.

But sometimes, movie studios release different versions of films to meet different audience needs.  For example, a version of a film shown on an cross-country airplane flight (“this film has been edited for content”) may be cropped differently or have a different audio track than the same film seen on HBO, on DVD, or when downloaded from Netflix.

Sometimes, the studios even release different versions of the films based on actual ratings received from the MPAA — they may sell an R-rated version at Wal-Mart, but an unrated version via Amazon.  Or a PG-version in the United States, and an NC-17 version in Europe.

So the question that Web Watch readers should be asking is “how do we go about to find out the differences between all these different versions of films, to be sure that the version we’re watching isn’t censored… or if it is censored, what are we missing?”

That’s where MOVIE CENSORSHIP comes into the picture.  They break down the different film versions and put the comparisons side-by-side for you to know exactly what it is that you’re seeing/missing when watching a particular version of a film.

(minor NSFW warning here, folks — some questionable images used to identify the differences between film versions may be displayed. So be careful if you’re reading Web Watch at work today.)

Let’s take a look at MOVIE CENSORSHIP’s review of that campy classic SHOWGIRLS.  Because there’s the

In this example, Movie Censorship analyzed the R-rated version of SHOWGIRLS and compared it to the NC-17 edition.  Here’s some of what they found:

See what we mean?  How can you enjoy watching a perennial classic like Showgirls knowing that there may be some vital plot content missing, keeping you from knowing the real motivation behind Nomi and Cristal’s feud and smoldering stares?