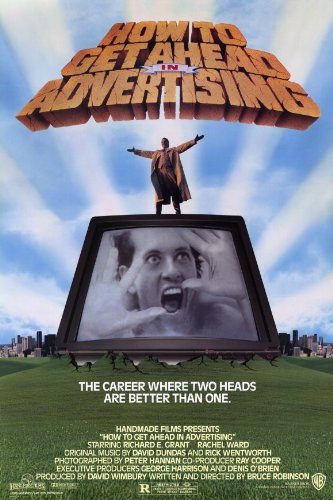 How To Get Ahead in Advertising

Remember the film HOW TO GET AHEAD IN ADVERTISING?  It’s about an advertising exec who ends up with a talking zit on the side of his face.  Yeah, it’s worth watching.

Or the Dudley Moore film CRAZY PEOPLE, where ad execs decide to get their advertisements written by people in the looney bin (“Volvo: It’s safe, but boxy!”).

How many times have you looked at the TV or radio during a commercial break and mutter to yourself, “Really?  Did they REALLY just say that?  Do they think we’re idiots?”  Without even knowing what you heard, Web Watch is fairly certain the answer to that rhetorical question will be “yes”.

Which brings us to today’s site: THINGS REAL PEOPLE don’t SAY ABOUT ADVERTISING.

The premise is simple: take all those advertising buzzwords or philosophies that are bandied about the executive offices, and visualize what those same words would look like coming from your audience.  Such classics as:

If this is the best your marketing department is coming up with, then maybe you’re not taking the time to think about how the audience is going to perceive your product or your marketing.

It’s like what is happening to KRAFT right now due to their decision to rush into having “Golden Voice’d” Ted Williams do a voiceover for their flagship Macaroni and Cheese product.  Sure, at the onset, it seemed like a golden opportunity to earn some immediate goodwill for helping out a homeless guy with a decent set of pipes.

But an incident that led to police intervention and a voluntary stop in rehab one week after recording the mac & cheese spot?  That can’t be good publicity for the famed blue box.  Maybe this is one of those times when the Kraft marketers should have sat back and waited to see what sudden fame would do to Mr Williams before thinking that the audience wasn’t going to go from thinking “I’ll buy some KRAFT Dinner because of KRAFT’s dedication to reaching out and helping with getting Mr Williams back on his feet” to “Why should I buy mac & cheese from a recent homeless guy?”