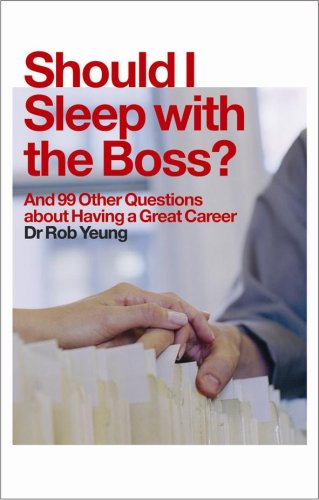 Should I Sleep with the Boss?: And 99 Other Questions about Having a Great Career

That’s the percentage of people who have admitted to SLEEPING WITH THEIR BOSS IN ORDER TO ADVANCE THEIR CAREER.

Do you know what 7% looks like?  Sure, you could do the easy math and say that it’s just 7 people out of your office of 100 employees.

That’s not so bad.

But if you work in a smaller office — let’s say an office of around 14 people… then take another look.  7% is the same as 1 in 14 people.  So you have to ask yourself – which one of those people are doing it?  You know they are – statistics don’t lie.  Besides, 17% of those surveyed said that sleeping with the boss was perfectly fine.

The survey was conducted by ADECCO in preparation for NATIONAL BOSSES’ DAY.  Another part of the survey also asked respondents to choose who they would most like to work for (based on a given list of celebrity bosses).

The results were really no surprise, with Oprah riding high on the list: