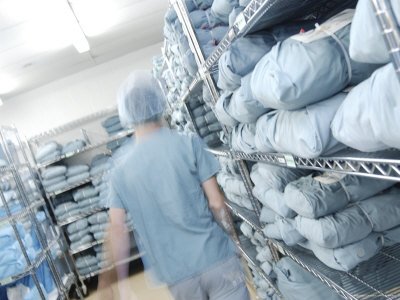 Doctor walking around in scrubs

You’ve seen them around town:  walking through the park on their way to and from lunch, driving through the bank teller line, shopping at the grocery store, eating at restaurants after a shift, riding your elevator — doctors, dental hygenists, nurses, and other medical professionals all wearing their scrubs out in public.

Why do medical professionals wear scrubs?  They’re easy to clean, and they don’t want to get their “real” clothes dirty.

So why do you see so many of these same medical staff wandering around in public in their scrub outfits?  They certainly aren’t going to wear these non-sterilized clothes anywhere that would possible infect you in their day-to-day care of your illness or dental exams.

A 2004 study showed that 50% of the clothing worn by doctors — like their ties, which serve no useful purpose in a medical office — were harboring BACTERIA LEADING TO PNEUMONIA AND STAPH INFECTIONS.

You have hospital staff and health care workers wandering their workplaces in their scrubs all day, and then sit in their cars – or next to you on the bus/subway – letting those germs transfer to other unknowing subjects.

Another study supports this — at a Connecticut hospital, researchers found that the MRSA VIRUS WOULD TRANSFER TO A WORKER’s CLOTHING 70% OF THE TIME, even if there was no physical contact between the worker and the patient — all the worker had to do was walk into the same room.  Yet another study from the University of Maryland shows that DOCTOR LAB COATS WERE FILTHY, where:

Why are these numbers shocking?  Because staph can live on these fabrics for almost 2 months.  Yet medical staff – who we trust to provide us a safe, sterile environment when we visit them – don’t seem to care.

Many hospitals have policies against wearing scrubs outside of their facility — but not many of the medical staff follow these rules.   You know why health care professionals like wearing Crocs?  It’s not just because they’re comfortable – but they’re easy to sanitize.  Yet those same footwear are also being worn everywhere, spreading their germs out of the surgical suite and into your grocery store.

Dr Charles Gerba, professor of environmental microbiology at the University of Arizona, agrees. He says that HOME LAUNDERED SCRUBS HAVE ALMOST AS MUCH BACTERIA AS THOSE THAT WEREN’T LAUNDERED AFTER BEING WORN ALL DAY.  He’s also found that 79% of unwashed scrubs tested positive for coliform bacteria and E.coli, along with the ever-present Staph. Yup, there’s a reason he’s often referred to as “Dr Germ”.

Remember when Web Watch told you about how much poop your underwear contains?  And how that fecal matter could transfer from wash cycle to wash cycle?  Same thing with washing hospital scrubs at home – especially if you’re mixing your work clothes with your home laundry.    Thinking about asking that hot nurse out on a date? Make sure that they’re not mixing their sheets with their scrubs – you may regret it later.

Obviously, where there’s a problem, there’s a solution.  Doctors and others who are concerned about the safety of their patients do have a choice.  They could leave their scrubs at the office to start.    Maybe they need to invest in the DocFroc line of antibacterial lab coats and scrubs.

But anyway you look at it, seeing someone walking around outside of their medical facility in their scrubs is akin to watching a restaurant employee leaving the restroom without washing their hands.

One reply on “Doctors, nurses, and other medical professionals spread germs everywhere they go”

I find it odd that this was posted in a “Science” section as there is no scientific organization or thought given in the writing of this article.
I agree that health care professionals should not wear their scrubs in public… but for the exact opposite reason this “article” claims. We should not wear them in public to protect our patients from all of the parasitic agents we would pick up in those public places. You see, every time someone exchanges money, opens a door, shakes someone’s hand, etc… they are exchanging all of the germs this article mentions. As a matter of fact, when cultured, a bathroom door handle in a public restroom has MORE bacteria on it than the toilet seats in those same bathrooms. Gross.

Also, the MRSA statistic mentioned above fails to note that it is standard procedure to don full PPE including a disposable gown and mask prior to entering a MRSA positive patient’s room and those items are disposed of in an isolation area before leaving that patient’s room.

And as for ” Yet medical staff – who we trust to provide us a safe, sterile environment when we visit them – don’t seem to care.”… this is an erraneous statement. We NEVER guarantee a sterile environment outside of the sterile fields and equipment we use for sterile procedures. That’s not possible, much less something one would “guarantee”. Healthcare professionsals are trained in SAFETY more than anything else and those HCWs that are competent and have professional integrity provide safe care that often saves lives, limbs and always prevent the spread of pathogenic microorganisms.

So maybe, just maybe, the writer should consider researching the facts before making disparaging, erroneous statements about HCWs.