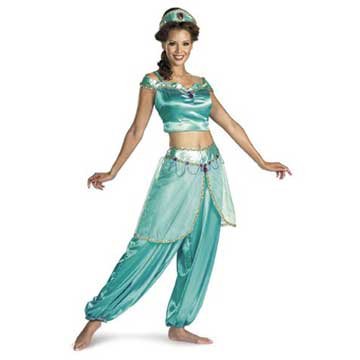 Ryan Astamendi is a professional photographer with an extensive portfolio of work.

One thing that he is becoming known for is his ability to recreate classic Disney Princess animated characters and turn them into real-life models.

Take, for example, the above stock advertising photo for a Jasmine costume from Disney’s Aladdin.  There’s nothing wrong with the photo or the model – it’s doing exactly what the marketing department requested.  If you’re looking for a costume, it’s perfectly adequate… but if you’re looking for the “essence” of the character, you have to look elsewhere.

That’s why what Ryan does is much, much more than just take a photo or two.

So much so that Ryan was asked to contribute not one, but two “princess interpretations” for the D23 book THE ART OF THE DISNEY PRINCESS. For the book, he created images for a reimagined Snow White and Jasmine.

He has the costumes created, props built, hair styled — and maybe does a tiny, tiny bit of Photoshopping — everything aimed at getting the photos to look “exactly” right in terms of what makes a Disney Princess come to life.  Take a look at his Jasmine image from 2008 as used in the book.   We know.  Wow, right?

Since then, Ryan has done new images for Jessica Rabbit, Pocohantas, Sleeping Beauty, and his most recent creation Rapunzel.  Neat fact – Ryan says his Rapunzel model actually plays Rapunzel at Disneyland.  Adding Belle to his portfolio, as has been the case for a while, is “next” on the list.

Web Watch hopes that he continues down the real-life princess photo gallery idea and completes the Royal Court with photo shoots for Ariel, Mulan, Cinderella, and some other non-Princess (yet still popular) characters like Alice… or even a villian or two.

If you like what you see, you can always contact Ryan on his website. Who knows, maybe he’ll pick you to be part of his ever-growing portfolio of real-life Disney characters.

[…] form.  Such is the case with Ryan Astamendi’s Disney Princess photo series, which has received recognition from […]