This year is no exception.

We’ll be posting photos of this year’s sexy Disney Princesses in Real Life here.  Bookmark this page for updates:

Compare the above with this photo from the 2008 Comic Con:

or this photo from the 2010 grouping (staged, of course) 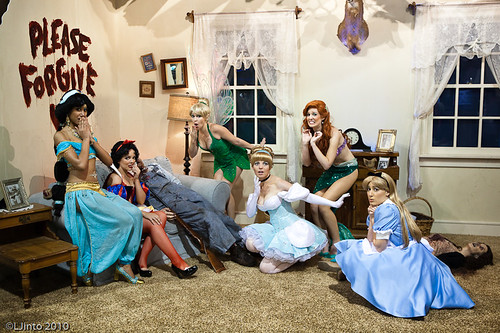 For those of you wondering exactly who this group of SEXY DISNEY PRINCESSES are, we may have found some of the answer:

The SEXY PRINCESS GROUP has their own page on Facebook.  Here’s what it says about who they are:

The Sexy Princesses are a fan costume group created as a fun way of showing love for Disney while enjoying being feminine.

The group first debuted at San Diego Comic-Con in 2008. The group has appeared every year since, expanding to a cast of 7 characters.

Christy Marie created the group and designed the costumes. Costume construction was done by Diana Rennie and Dena Prim. Diana was also influential in some of the costume designs. The costumes are a continuous work in progress.

The Sexy Princesses are:

The princesses getting into character for their photo shoot:

You know that this group hit the big time when Heather and Becky appeared in TIME magazine in 2009.

One reply on “Real-Life Disney Princesses at 2011 Comic-Con”