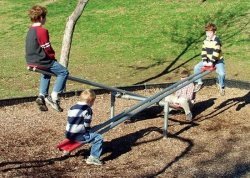 Children of all ages have been getting injured at the playground for years.

Playgrounds, just by their very nature, are just waiting for accidents to occur, no matter how safe they appear to be.

According to research of medical records, 10% of children’s injuries (ages 5-9) are related to playground equipment.

The same study showed that playgrounds accounted for 6% of injuries for kids aged 2-4 years old, and 2% for the older 10-14 year-old kids.  Web Watch will make an assumption that the older children are being injured due to reckless behavior more so than standard playground-type activity.  Just saying.

What were the most frequent type of playground injuries?  Fractures, at 43%.  Other areas frequently injured were arms/hands and head injuires.

As it’s inevitable that children will get injured while playing on the playground, parents should be mindful of these SIX TYPES OF RISKY PLAYGROUND BEHAVIOR:

So does this mean that parents should forbid their children from playground playtime?  Absolutely not.  Just cross your fingers and hope that you raised your kids properly to respect the danger that the playground could bring.