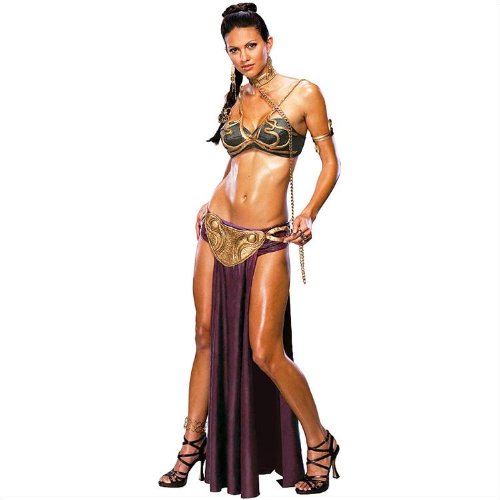 This week at Comic-Con 2011, news organizations are likely to focus – at one time or another – on the cosplay phenomenon…. especially with what the ladies wear.

Women are using ComicCon as an opportunity to wear their “Sexy Halloween Costumes” more than once a year, especially if their costume of choice involves any type of sexy television character, sexy cartoon character, sexy literary character, sexy sci-fi character, or any other appropriate costume that can have “sexy” put in front of it.

For example, Web Watch has covered the group of REAL LIFE DISNEY PRINCESSES recreating the FUNNY FACES artwork at Comic-Con previously, and we see nothing wrong with women who want to participate in this convention in any way they see fit.

But sometimes, you can have too much of a good thing.

And too many women dressed as Sexy Slave Princess Leia is one of them.  Let’s take a look at how one Sexy Princess Leia can be good, but not when every woman is dressed the same way – in this PSA by BIG BANG THEORY‘s Kaley Cuoco:

Wearing the costume in public can also get the police involved.  Here’s an introduction to some of the Slave Leias who attended the 2010 Star Wars Celebration V — including supermodel Adrianne Curry, who was molested by a drunk fan while she was wearing the costume – he was later arrested, but she did not press charges.

Still not convinced that we have too many Princess Slaves? You can always browse this gallery of the 20 HOTTEST SLAVE LEIAs.

How about a Sexy Slave Leia charity car wash, all for the Make a Wish foundation?

For those of you who don’t mind following the crowd instead of marching to your own drummer, you can always order your own Princess Leia Slave costume from Amazon or from LEIA’s METAL BIKINI.

Have kids?  Why not get them the Princess Leia Slave LEGO MiniFig to play with?  After all, the LEGO figure was named one of the 20 MOST UNSEXIEST VIDEO GAME CHARACTERS EVER