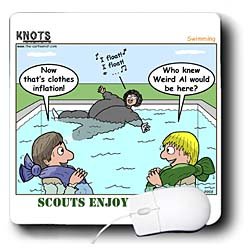 According to a recent survey, 58% of Weird Al Yankovic fans have been involved with scouting.

A different survey from the same group says that 75% of those who have cheated have also smoked pot.

Thus says CORRELATED, a website that’s trying to find correlations between completely disparate situations based on a daily question.

And since statistics often are only as good as the data being fed to it, and obviously these survey questions really only reflect those who particpated in the survey in the first place.  Small sample size? Most definitely.  Only 161 people are listed as having cheated while smoking pot — not exactly a large population size for accuracy.

But as they say in sports, a win is a win no matter how ugly.  So the stat counts.

Sounds a lot like FREAKANOMICS?   You bet.  That’s why Freakanomics is quick to point out that just because a correlation exists between two activities, that doesn’t mean that there’s is causation between the two.

So what Correlated does is ask it’s visitors a simple question every day, such as “Do you like cats”?

Seems pretty innoculous, so you answer.

A few weeks later, you answer a question about how old you were when you got married.

Linking your two answers together, Correlated can truthfully say that “Cat lovers get married at X age, compared to those who hate cats who got married at Y age”.   See, it’s all about the data and how the numbers are crunched.

So go ahead.  Answer a few questions.  You may end up revealing a little bit about yourself, but it’s all for science.