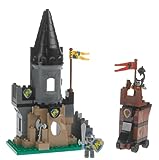 GEMCRAFT CHAPTER 0: Gem of Eternity is the latest edition in the “tower defense” game genre from Game in a Bottle.  If you like tower defense games but were bored by the redundant nature of them, you’ll want to check out Gemcraft.

For those of you not familiar with the Tower Defense genre (and if  you’ve been reading Web Watch over the years, you’ll know that we here at Web Watch do enjoy a good castle seige timewaster), let’s explain the concept that all tower defense games typically follow:

I was not a fan of the original Gemcraft at all.  While I appreciated the concept, I found it boring overall and lacking replayability for me.

Not so with Gemcraft Chapter 0.  Because of the way the level system is made, you have multiple goals to complete as opposed to simply powering through all the different maps.  The biggest difference between Gemcraft and all the other tower defense games is that every map features different types and combinations of defense mechanisms, traps that you can embed in the road, and the ability to alter your skillset to a particular map’s monster set.  Need to be able to build more towers cheaper?  Done.  Want your towers to be more effective?  You can do that instead.  (Which do you choose, cheap plentiful towers or a few expensive powerful ones?)

And then there are the gems that control your defenses, that you can place anywhere you’d like, swap them out, combine them into more powerful versions, and even use them as bombs.  The power is in the gems; your goal is to decide how to best use them.

Aside from the variety offered in different map layouts and gem types, each map has 9 different goals to complete that are unlocked as you play through.  This encourages repeat play and a reason to return to a previously completed map other than using them as easy ways to level up.  A map that you may have beaten easily when the goal is set one way can be completely different when the goal and monster mix are adjusted.  In other words, don’t judge a map by its cover.

Knowing how to assign your earned skill points, which gems to use, and the best way to lay out traps and towers are only part of the fun.  The people behind Gemcraft have also come up with a list 201 achievement goals to complete in the game, because everyone likes to unlock achievements.

Because of the sheer flexibility in the game setup, it may take a little bit to get used to all the different ways to play the game, along with coming up with good strategies to use.  There are a few Gemcraft walkthroughs with hints (and some with videos showing all the levels) that you can always refer to if you get stuck somewhere.

Here’s the biggest Gemcraft hint I can give you:  while traps containing poison or slow gems do a good job, you are better off building a few well-placed towers, then loading them up with grade 3 or higher gems.  Don’t concentrate on keeping the gems pure, unless you have reason to do so from a points or goal perspective.   What’s the fastest way to get grade 3 gems?  Build up enough mana to create two level 2 gems, then merge them first chance you get.  You’ll be surprised at how quickly you’ll be able to do set up your defenses with this method.  You can power through practically any map, any level, using just a few well-placed high-power gem towers.

If you’re looking for a way to kill 20 minutes or so at lunch and you’ve been bored with the traditional tower defense games, you’ll want to give Gemcraft Chapter 0 a try.