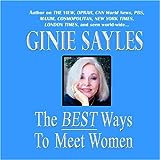 Are you having trouble dating, if only because you’ve dated so much that you have depleted the local singles scene?

Maybe its time to change your venue and move to a new city.

A new city with a plethora of single people to choose from.  The question is where do you go?

Check out this MAP OF THE BEST SINGLES CITIES IN AMERICA.

Boston is a rarity – a big city with a fairly even percentage of available men and women.

One possibility that researchers came up with regarding how some of these larger cities have a huge disparity in singles numbers is that young women (ages 25-44) move to the big cities to get the most eligible men.  And some of those women end up being choosier than they should be and end up staying single longer than if they were living in a less vibrant location.