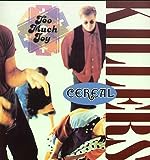 TOO MUCH JOY was a band in the early 90’s that not a lot of people knew about, although they had a reputation for being one of the best live bands around.  Web Watch knows this first-hand, having been lucky enough to have the chance to see them play more than a few times over the years.

” (which also was part of a lawsuit brought by Bozo the Clown).  Web Watch recalls that “CRUSH STORY

” was used on some television special about teen idols in 1992 or so.   And fans of magicians Penn & Teller should know about the band, as Penn as praised TMJ repeatedly in print and has sat in with the guys in the studio, and Teller directed one of the band’s music videos.

In other words, Too Much Joy has been around the block a few times.  They’ve released a few albums, made national news covering other people’s songs, had some radio play, have celebrity fans, and have done pretty well for themselves in the subsequent years.  They’ve even been called “sell-outs” by some of their fans.  What’s not to love?

Tim Quirk, lead singer of Too Much Joy and now an executive at the music streaming service Rhapsody, knows the answer to that question:  the music royalties.

It’s not the royalties themselves that has Tim pissed off, but it’s THE FUZZY MUSIC ROYALTY ACCOUNTING being done by Warner Brothers, Too Much Joy’s label, that has him reeling – and it’s a really good lesson for anyone who is curious about the ins-and-outs of music royalties to take into account before they decide to go into the music business in the first place.

It seems that Warner Brothers charged Too Much Joy for promotion of their albums and other business fees.  WB gets to keep all the royalty payments received until the debt is paid off.  Anything earned after that point is the band’s to keep.

Their latest royalty payment was for $62.47.

That number doesn’t make any sense to Tim, especially since he’s in a position to actually know what he’s talking about.  Tim details all he went through to get answers out of the Warner Brothers accounting department, asking all the tough questions that needed to be asked:

And iTunes information was nowhere to be found on the reporting statement Tim received.

Obviously, Tim’s rant should get a followup of some kind.  One of the commenters on his post suggested giving 60 Minutes a call to do an expose on the inner-workings on digital music royaties and where all the money goes – especially if the money isn’t going to the band because the accounting is flawed.

After reading what Tim has to say about how Too Much Joy appears to be getting screwed over by Warner Brothers, it’s no wonder bands are bypassing the record companies and releasing and distributing their music themselves.