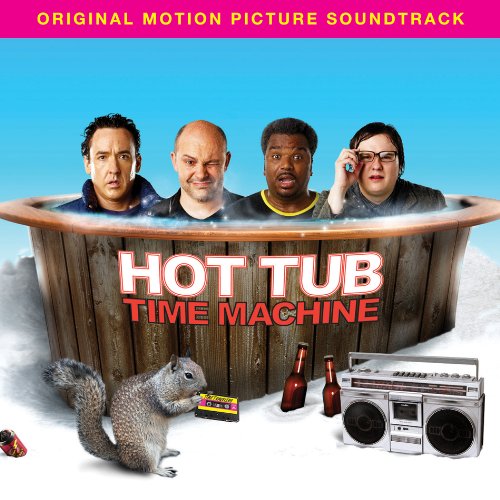 Web Watch loved those classic 80’s raunchy comedies, such as HOT DOG… THE MOVIE, CLASS,  LOSING IT, or THE LAST AMERICAN VIRGIN.  HOT TUB TIME MACHINE harkens back to those simpler cinematic days, when all you needed for a comedy was a weak premise, some decent jokes, a killer soundtrack, and an excuse to show people naked.

Luckily, HOT TUB TIME MACHINE delivers on three counts – it has a killer soundtrack, it shows plenty of people nekkid, and the premise is pretty well summed up in the title of the film: it’s about a time machine that’s also a hot tub.  Unfortunately, the film doesn’t get much better than the title.    But, if you’re looking for a film that lives up to its 80’s comedic pedigree of sex, drugs, and rock-n-roll, then you’re covered on all counts.

As for the jokes, we laughed at maybe two throughout the whole film (and they were pretty funny setups, so they get credit for that).  But we wanted something that was a laugh riot from beginning to end, and HOT TUB TIME MACHINE just didn’t do it for us.  That said, our movie watching companions laughed their asses off throughout the entire film – so maybe they found humor in parts that we thought were a little dry.  To each their own, your mileage may vary.

To us, the most disappointing part of a film that celebrates the excesses of 80’s cinema is that they blew so many chances to really shine.  There’s one scene in particular — and Web Watch is not giving anything away by sharing this — where John Cusack is hanging out in a long duster overcoat while on the shelf behind him is a giant boombox.   It would have been absolutely awesome if Cusack had turned around and grabbed the boombox, and held it over his head for even a brief second.

But no, he didn’t do it.  Needless to say, Web Watch was sorely disappointed.

What could have been a film filled with awesome 80’s references like that was completely ruined by not including them.  Whatever perfect opportunity they had (with 80’s standbys Chevy Chase, Crispin Glover joining in) to completely parody…nay, embrace… the genre that they were trying to emulate was lost when that scene (and others like it) were either not written, not filmed, or left on the cutting room floor.

Besides, having a killer 80’s soundtrack isn’t enough if it doesn’t include IN YOUR EYES.  ‘Cause that song is awesome, time machine or not.