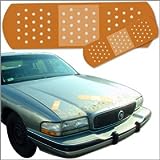 If there’s one thing that Judd Apatow and his crowd have proven, it’s that raunchy R-rated comedies do sell tickets. Based on that, THE GOODS should fall into the same category as THE HANGOVER did earlier this summer.

Unfortunately, THE GOODS – while having a strong pedigree in Jeremy Piven and his wacky supporting cast of extremely funny people – doesn’t quite live up to the promise. Just like the used cars being sold in the film, it seems like the audience is being sold a lemon: it’s good enough to get us onto the lot and drive away, but it isn’t necessarily going to get us where we want to go.

Are there laughs? Yes. Are they plentiful? Not so much.

Are there hysterical cameos from people you didn’t expect to see in this film (especially if you haven’t paid attention to the producing credits beforehand)? Absolutely. Do the cameos get enough screen time to save the film? Not nearly enough.

Ving Rhames needs to do more comedy.  And if you’re a Buster Bluth fan, THE GOODS shows how premature it was to cancel Arrested Development.

To be honest, the film opens strong and does fairly well until the final 1/3 of the film. That’s where – for us, at least – the raunchy R-rated comedy that we came to see turns into a sappy PG-13 date film. In other words, the ending of the film just did not live up to how it started. If only they had kept up the pace that was set in the opening, we would have had a great summer bookend for THE HANGOVER.

We’re looking forward to seeing this on DVD, because the parts of the film that were funny really were hysterical. But more importantly – we really want to see the outtakes that didn’t make it into the final cut. Based on who’s in the film, those are going to be awesome.