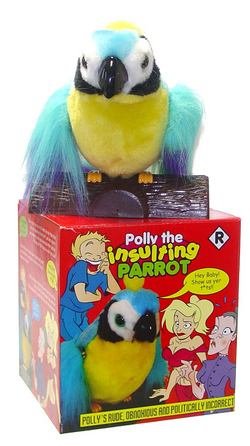 Web Watch is always careful when we visit with our friends who have small children to watch our language.  After all, it’s common courtesy to not recite George Carlin’s list of Dirty Words in front of those who are too young to appreciate the nuance of language, or who may be offended overall by hearing words in polite company that would be later yelled out the car window at the a-hole who just cut you off in traffic.

But it may end up that Web Watch has been overly cautious.  While we don’t want to be the ones who introduces foul language to our friends’ children, it may be that the deed has already been done long before we showed up for the pot-luck.

Because research has shown that CHILDREN AS YOUNG AS 2-YEARS-OLD ARE CURSING. In fact, children are now really beginning to swear in earnest between the ages of 3 and 4.

It all begins at home… and not from the television.  It’s the parents.  66% of adults who have rules against their children swearing admit that they themselves swear at home.

Researcher Timothy Jay, a psychology professor at Massachusetts College of Liberal Arts, has been studying language and curse words for a few years now, and he has found that CURSE WORDS MAKE UP ANYWHERE FROM 0.3% to 0.7% OF OUR DAILY SPEECH.

Jay’s research has identifyed over 70 different swear words in the English language that are considered to be the “most” taboo.  But even with that variety, foul-mouthed folks like to stick to the same 10 tried-and-true all-purpose curse words.  The following 10 words/phrases make up over 80% of all common swearing:

Web Watch doesn’t know why “sucks” is on the list as a swear word, but whatever.

Other swearing statistics that came from Jay’s study are that men swear more than women do in public (both in the amount of swearing being done, as well as in word choice).  But both men and women will swear more frequently when in a group consisting of their own gender.   Most swearing is done when a person is a teenager, with the amount of curse usage dropping as the person gets older.