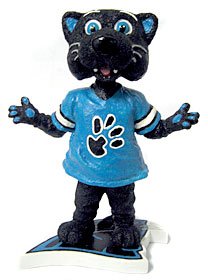 The WALL STREET JOURNAL has reported that the CAROLINA PANTHERS WERE THE LEAST EXCITING TEAM IN THE NFL this season.

Can’t say that we disagree, considering that would be one explanation of how the Panthers “earned” their number one draft pick in the next NFL draft.

It’s all based on a fancy calculation run by THUUZ, a website that specializes in identifying what are supposed to be the Most Exciting Matches to watch each weekend in order to help fans maximize their entertainment dollar, instead of being stuck watching a real snoozefest of a matchup.

Using a rating scale that takes into account the speed of a game, the parity between the teams, and how unique or novel the overall plays are, the most exciting teams this past season were:

From the bottom, joining the Carolina Panthers at the bottom of the excitement list were the Seattle Seahawks and Arizona Cardinals.