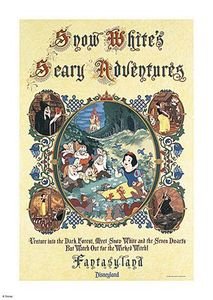 Web Watch will break this down for you, summing up what other websites have already said:  Walt Disney World is currently in the middle of a long-awaited (and much needed) multi-million dollar expansion of Fantasyland, originally with the following changes:

But when the new Walt Disney World president took a look at the plans, he thought to himself, “whoa – that’s an awful lot of girlie stuff.  What’s there to do for boys… like my sons?”

Exactly the same thoughts that Disney fans were also thinking…. which meant that the Disney Imagineers had to go back to the drawing board to see what they could salvage so they don’t turn Fantasyland into a place that boys run through without stopping when on their way between Tomorrowland and Frontierland lest they catch icky cooties from all the pink and chiffon.

Which is why they scrapped the fancy Disney Princess meet-n-greet opportunities and turned that empty available space into the SEVEN DWARVES MINE TRAIN roller coaster ride.   It won’t be nearly as exciting as Expedition Everest, Big Thunder Mountain, or the oft-rumored Disney Villain-themed Fire Mountain (the mine train attraction probably won’t even qualify as an official “Disney Mountain” like the other coasters are), but it will serve a purpose of giving a little bit of gender-neutral excitement to what would have become an overly frilly section of Walt Disney World.

Here’s the problem:  while Disney has often used a single character to theme multiple attractions – such as Nemo being a stage show at Animal Kingdom and a ride-through attraction at Epcot – they try not to have two attractions for a single character at a park.  You may think that the ALICE IN WONDERLAND ride and MAD HATTER’S TEA PARTY at Disneyland would qualify — and you’d probably be right — but just go with us here, as the logic makes some sense.  What they didn’t want to have is the SNOW WHITE’S SCARY ADVENTURES ride (featuring Snow White and the Seven Dwarves) across the walkway from the SEVEN DWARVES MINE TRAIN (featuring the dwarves and Snow).  That would be just a little bit too much dedicated to a single film.

So the Imagineers decided to make lemonade out of lemons.  Because with Mickey’s Toontown Fair going away to make room for a pair of flying pachyderms, that also means that the current PhotoPass opportunity (aka meet-and-greet) with many popular characters was going to go away until new homes could be found.  Mickey and Minnie were already going to set up shop just off of Main Street USA, but the Princesses needed to find a new home, too.

Where could they go?  How about we rip out the old, outdated technology of the SNOW WHITE attraction, and use that space for the Princesses?  It’s technically in the Cinderella Castle area, so that would make it extra special, too.  Especially since it will be near the Bibbidi Bobbidi Boutique where girls could get their princess makeovers before walking across the courtyard to meet their favorite Princesses.

Rumor has it that eventually, the Princesses will be moved to a new, built-especially-for-them photo location at the old Fantasyland Skyway station, and that the SNOW WHITE attraction space will be reused for an attraction based on a Pixar film (Perhaps UP.  Perhaps a film to be released later.  Rumors don’t always have tons of information).  In any case, SNOW WHITE’S SCARY ADVENTURES is almost definitely not coming back.

So now that you have the background information, let’s get to the question of the day:

WHAT WILL BEN MILES OR OTHER AUTISTIC CHILDREN DO WITHOUT SNOW WHITE?

Who is Ben Miles?  Ben Miles is an autistic teenager whose favorite ride of all time is the Snow White attraction.  When it became known that he was going to ride the Snow White ride for the 2,000th time, CAST MEMBERS MADE BEN AN HONORARY CITIZEN and celebrated the achievement.  As of December 2010, Ben reportedly had ridden Snow White over 3,100 times since 2002.

His father, Ron, says that they don’t know what it is about the attraction that Ben finds so fascinating – that’s the type of question many parents of autistic children have, regarding the mysteries of autism. But Snow White allowed Ben to speak to his parents for the very first time on his own, so the ride must be filled with some sort of Disney magic pixie dust.

And Ben is not the only autistic child who finds comfort at the Disney parks.  WDW AUTISM is one of many autism-related sites out there that have recognized that Disney has some connection into the heads of autistic children and know that there’s something there that just can’t be explained.

Long story short — how will the removal of the Snow White attraction affect families with autistic children (more specifically, kids such as Ben Miles who have such a strong affinity for the ride that it’s become part of their psyche)?  Will these kids regress back into their withdrawn, autistic state as before they experienced Disney or Snow White?  Or will having ridden a ride over 3,000 times have such long-lasting benefits that any Snow White attraction withdrawal will not be noticed.

Only time will tell.

For those of you who’ve been wondering, this past weekend was the last weekend for Snow White’s Scary Adventures at Walt Disney World’s Magic Kingdom.

There is an update regarding how Ben and his family are dealing with the situation.

He’s ridden the attraction over 3,451 times, all in 3-minute increments.

And we now finally know how incredible the cast members at Disney can be when it comes to making a Magical Moment. On the final days of Snow White’s Scary Adventures, Ben not only met a goal of riding the attraction exactly 3,500 times, but he also got to ride with Snow White herself…  And you wouldn’t believe us if we told you that wasn’t the most amazing part of the story…

One reply on “A Disney Dilemma: What will autistic children like Ben Miles do without the Snow White attraction?”

[…] Web Watch by Web Gangsta presents A Disney Dilemma: What will autistic children like Ben Miles do without the Snow White attraction? […]