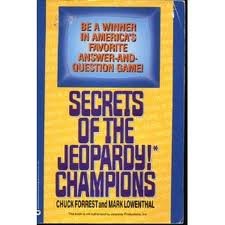 Secrets of the Jeopardy Chamions

Web Watch is going to followup yesterday’s JEOPARDY post with this one, regarding WHICH SEARCH ENGINE WOULD WIN JEOPARDY!?

First, let’s consider the average human contestant on the game show.  The average contestant only buzzes in and answers about 60% of the questions correctly.

Ken Jennings, Jeopardy! superstar, was able to buzz in with a whopping 79% success rate.

So how do today’s search engines fare?

About as well as you would expect… and not nearly as good as Ken Jennings’ performance:

But having the answer appear on the search result page is only half the battle.  The other part is whether the search engine’s first response – the one that the search engine has determined to be the best match for the question posed – is of the correct answer.

What does this mean?  If you’re looking for the correct answer to your question, Jeopardy!-style, then Google is still the one to beat.  Nothing wrong with Bing or Ask – but you may have to dig a little for the answer instead of relying on result #1 of the search result page.