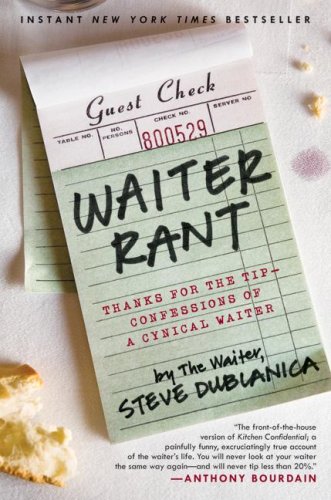 Waiter Rant: Thanks for the Tip–Confessions of a Cynical Waiter

Eating out is fun for us, the customer.

We get some (usually) good food, brought to us by (usually) attentive waitstaff.

Sometimes, everything lives up to our expectations; sometimes it doesn’t.  That’s the risk we take when we decide to put our food preparation into someone else’s hands rather than doing it ourselves.

But there is a flip-side to everything.  Which is why Web Watch readers should pay attention to these TOP TEN THINGS YOU SHOULDN’T DO WHILE DINING OUT, as compiled by Jessica, a former food-service employee and inspired by stories she’s read on WAITER RANT, a blog of restaurant horror stories.

Some of the suggestions Jessica makes include:

Looking at the entire list, the majority of the items seem to fall into the “don’t be an ass” and “don’t be rude” categories.  And Web Watch completely agrees with those sentiments.   But did we know not to order drinks from the bartender instead of from the waiter?  Now, that’s just confusing.