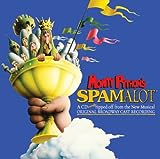 I was surprised at the number of parents who brought young children with them to the show.

I’m assuming that they didn’t remember that
the Monty Python series and movies have bad language, nudity, and occasionally questionable material not aimed at kids.

It might be easy to explain chorus lines of women in garter belts and bustiers; a bit harder to explain why there is an entire musical number aimed squarely at being gay (with sparkly codpieces on the cast), even more difficult to define what the word “twat” refers to, or what all those goatse-like hand gestures were. But I digress.

It’s been a while since I’ve seen a play that the entire crowd seemed to want to enjoy as completely as this one. I have one regret that a particular scene appears to be missing entirely, and there was one line in a song that I was expecting to hear and didn’t (I could have missed it, didn’t matter either way)

Regardless of all that, enjoyed it a lot.