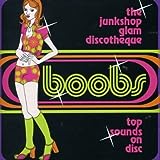 Leave it to those wacky scientists – one has discovered the SECRET FORMULA FOR PERFECT BREASTS.

In a paper entitled “Concepts in Design for Breast Augmentation” being presented at a breast enlargement conference being held in London this week, scientist Patrick Mallucciwill share the findings that he came up with after studying hundreds of topless celebrity photos.

Mallucci said, “I studied a wide variety of photographs of the most popular topless models to work out the various proportions they had in common and what made those particular features attractive.”

Mallucci says that the best breasts are those that have good proportion between the upper and lower halves of the breast (with the upper half just a bit smaller than the lower half), and a nipple that points slightly upwards and sits about 45% down from the top.

So who has the worst breasts, according to Mallucci?
They belong to Victoria Beckham (aka Posh Spice), and are often referred to as being “unnaturally round”.

And the best?
Those belong to Caprice Bourret , the model.