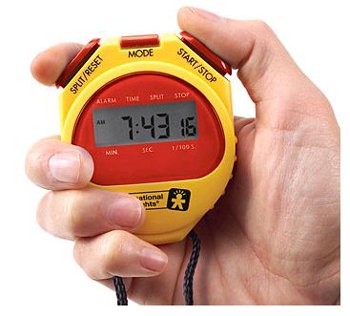 Sometimes, all it takes to break out of a slump – whether it be marketing or designing a new product, or just getting out from under a deluge of emails in order to proceed along the rest of your day – is to apply some new rules to your life.  Today, Web Watch would like to introduce you to the TWO MINUTE RULE and the THREE MINUTE RULE.

The TWO MINUTE RULE is a simple way to instantly become more productive.

Anything that will take two minutes or less, you should do immediately.

The Two Minute Rule can apply to anything  – from housecleaning to clearing your your email box.  What this will do is clear your desk/mind of all the petty items that individually are easy to dismiss, but can become a bother if you (a) let them stack up into a giant task that needs to be dealt with via other means, or (b) frees you up to concentrate on the remaining Big Picture items that will take a significant amount of time to complete.

Dean Acheson, WHO CAME UP WITH THE TWO MINUTE RULE, figured out that the best way to determine if some activity qualified under the Rule was to rephrase the question appropriately.  Instead of asking “how quickly can you get this done?” and then deciding whether or not to proceed, he put a definitive timeframe on the question: “Can this be done in two minutes or less?”

Now, in the real world, the “two minutes or less” can be a bit arbitrary – sometimes the actual time it will take will be 5 minutes, or even 10.  But the essence is the same – is the activity something that can be knocked out fast and cleared off the to-do list?

Applying the “2 Minute Rule” may lead to some questions on proper execution.  For example, what do you do if you start out with good intentions, but the task really does end up taking longer than two minutes to complete?

Simple:  set the task aside and put it back on the to-do list so it can be prioritized properly against the other things that need to be done.  Either your estimation skills are off, or the task really is more complicated and needs more attention paid to it.  The point is that you don’t want to spend any more time than absolutely necessary in order to complete the task at hand.

As for dealing with a long list of two-minute items that may seem daunting when you have other, more pressing tasks?  Trust us on this – being able to get rid of a few low-priority items will make it easier to handle the other ones.   And if one two-minute task leads directly into another one?  Apply the same two-minute process to the new tasks as well, or add the subsequent tasks to your to-do list if they will take longer.

All in all, you should find yourself just whipping through those task lists and email inboxes with ease and authority.

Which brings Web Watch to the THREE MINUTE RULE.   There are actually two similar ones that you will want to consider:

The “3 Minute Rule” for conversation is quite simple: it takes three minutes to successfully engage a stranger in conversation.   This applies to salespeople, blind dates, company social events, or even neighborhood picnics — anywhere you may run into a stranger where you want to strike up some talk.  After the first minute, people will begin to let their guard down and open up a bit…  and if you can make it last three minutes, then you should have something.

An oft-used example of this is observing shoppers at a grocery store, walking around without a shopping cart and holding their purchases in their hands as they approach the checkout lane.   Some people say that they don’t use a grocery cart in order to limit the number of items that they buy on any given shopping trip.  Others say that they do this because they really only came in for one item and don’t need a cart at all.

But if you ask the shopper at the checkout lane what they were doing for those three minutes immediately beforehand, it is likely that they’ll tell you that they were in the back of the store and didn’t feel like walking back up to the front of the store to get a cart or basket to continue their shopping with their hands free.

The conclusion on this was for some grocery stores to start putting carts and shopping baskets in the back of the store for people to grab if they found themselves with their hands full.  Stores that did this found that their sales did increase, as it provided those shoppers who were just running in for one item the ability to easily pick up more than they expected to.

All because someone bothered to ask about what the shopper was doing in the previous Three Minutes.

So think about how you can apply the Three Minute rule to your own situation – what improvements can you make by thinking about what you are doing three minutes before you do something, and three minutes after?

I noticed that a link to my blog had been put up. I just wanted to say Thank You for reading my article. I also found the two minute rule quite interesting. But for me I tend to be a bit messy at home so I follow someone who created a similar rule which was the “one minute” rule. So anything I do at home that takes less than a minute I take care of it right away, and man has it made my place so much cleaner.

I used to study sociology, and I tell you that basket in the back of the supermarket is a bloody brilliant thing. If I ever own a grocery market, I’m going to implement that as a policy.