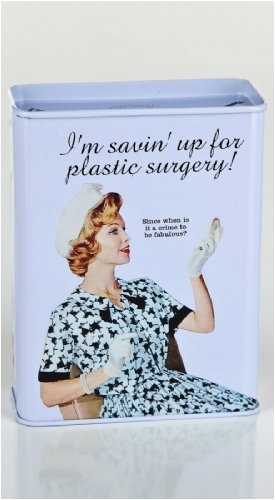 I’m saving up for Plastic Surgery

First, look for a drooping facelift – most often caused by doctors just pulling the skin horizontally towards the ears.  It’s what makes bad facelift recipients look like they’ve spent the night in a windtunnel.

What happens is that while the face is held nice and tightly at the ears, the middle of the face melts downward a little bit.  Some have also called this droop a “Nike Swoosh”.

Next, pay attention to the ears.  A PIXIE EAR is caused by a doctor eliminating the earlobe during the skin tightening surgery.

Thirdly, overly-arched eyebrows often come from poor Botox injections.  You may have been surprised when it happened at the time, and that permanently surprised look is going to stick with you for a while.

The overly-done and smooth, narrow nose is an obvious looker.  We won’t elaborate beyond “you know it when you see it”.

Finally, the tell-tale surgery scars behind one’s ear that just don’t blend in well with the surrounding skin color.