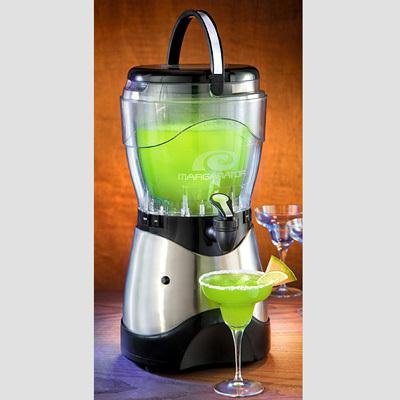 When you hear his name, you should raise your salt-rimmed glass high in the air and sing his name proudly.

Why?  Because without his ingenuity, we would not be sipping this frozen concoction that helps us hang on.See, back in the 1950’s Mariano Martinez invented the frozen margarita as an alternative to the traditional version served on the rocks.  Just throw tequila, limes, ice, and other Margarita makings into a blender and go to town.  But there’s a problem that can occur when you invent a time-consuming beverage that turns out to be extremely popular: it take up your bartenders’ time to make it.

The challenge that he had was to create a machine that would create the frozen version of the cocktail to have the same quality as one made in a blender.

What Mariano did in 1971 was notice a 7-11 Slurpee machine (itself, invented back in 1960) and apply the concept to a salvaged soft-serve ice cream machine that he was able to convert to mass-produce the Frozen Margarita so his Mariano’s Mexican Restaurant bartenders could keep up with the demand for the tasty drink.

How popular were Mariano’s margarita’s?  At one point, his restaurant was selling more tequila than any other restaurant in the world.

His invention was so inspirational that it landed as one of the TOP TEN INVENTIONS FROM THE NATIONAL MUSEUM OF AMERICAN HISTORY COLLECTION at the Smithsonian.  Web Watch would like to say that it was one of the TEN MOST INFLUENTIAL AMERICAN INVENTIONS, but that doesn’t seem to be the actual name of the collection.  Our mistake, but an obvious one when you see the list of the 10 inventions that made the cut: