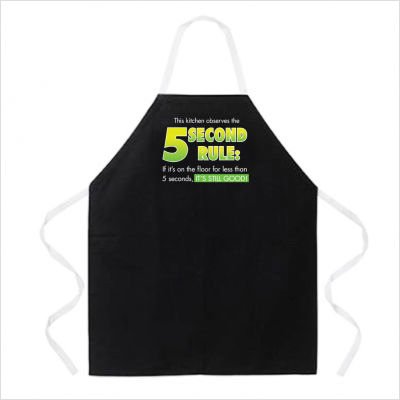 Web Watch tries to follow a strict rule of thumb when it comes to restaurants that we’ll frequent:  we prefer restaurants with a relatively high health score.

For states that follow letter grades, nothing below an “A”.

We know health inspectors and restaurant owners. We’ve read the restaurant report cards.  We know that the end-resulting score is a negotiation up, rather than a negotiation down.  In other words, if the score is a “81”, you have to wonder what the original score was before the inspector and the restaurant owner came to various agreements over the validity of certain infractions.  To us, that “81” is really a “75”.  And Web Watch refuses to eat at a place where cleanliness is just average.

So should we have been surprised when we read this STUDY ON HOME KITCHEN FOOD SANITATION, that showed 15% of those surveyed admitted to having served food that had fallen to the floor?

The 10% that said they have served spoiled or stale food to guests?  We’re a bit skeeved by this, but we also make it a point to rotate our pantry stock every few months — and once a year we do a massive pantry and spice cabinet purge.  Spices go bad after 6-to-9 months anyway (losing their taste profiles at least), and you know that box of Rice Krispies in the back of the cupboard isn’t doing anyone any good just sitting there taking up space.

Other survey findings include:

The one thing that women found most difficult to master cooking? Boiling an egg.