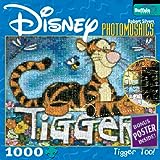 You’ve seen Photomosaics before, right?  That’s where you take hundreds or thousands of pictures and then combine them into one giant picture of something else?

You know, like this Tigger jigsaw puzzle.  The image is made of thousands upon thousands of animated cells, combined to make a single image of Tigger.

Well, here’s a website that lets you do the same sort of thing, but using YouTube videos instead. (Thanks, Alain!)

Just head on over to YOOOUUUTUUUBE and pop in the URL of your favorite YouTube video.  Then select a video size that you want each frame to be displayed with (80 pixels is a good size if you want to see details from the video).  When you’re ready, click GO.

Here’s an example using THE WONDERFUL THING ABOUT TIGGERS (animated clips tend to work better than live-action if you’re looking for interesting color saturation and transitions).

The video will then play, and repeat, in its entirety, with each frame of the video getting its own display.  The video will scroll out frame-by-frame across your screen, making a really cool video wall.   If your speakers are turned on, you’ll even get the audio track.

This is something that might be really neat to use as a screensaver or wallpaper on your computer or big screen TV (if you can access the ‘net from your living room television, give it a try there and let Web Watch know how cool it looks).

Try playing with music videos, or movies with cool action sequences, like these:

Be careful – some films shot with low light will come out too dark to be worthwhile.  Look for some stuff with colors that pop off the screen.  And letterboxed videos aren’t the best choices either.

what happened with the TRON link?

Just checking to see if anyone was paying attention. Link has been updated….