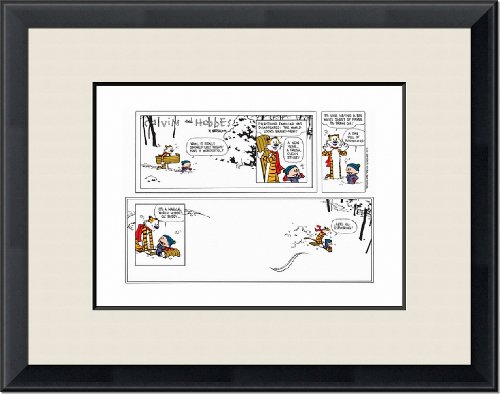 Comic fans around the world mourned when Bill Watterson decided to stop writing CALVIN & HOBBES.  Considering how much demand there still is for various Calvin or Hobbes merchandise based on the sheer number of counterfeit “Calvin peeing” stickers one sees on the back of pick-up trucks around the country, it was only a matter of time before someone picked up the gauntlet for us fans.

Demand for Bill Watterson’s drawings is so high, any new art from him is newsworthy to the point where the Washington Post had to write an article about Watterson’s first released art in 16 years.

Which leads us to HOBBES AND BACON, a tribute to Calvin and Hobbes by web comic writers/artists Dan and Tom at PANTS ARE OVERRATED.

Based 26 years later after we last saw Calvin and Hobbes sledding off exploring an another adventure, we have Calvin happily married (apparently, to Susie Derkins), with a young daughter named Bacon.

Web Watch will let you enjoy the strips on their own, as Dan and Tom have perfectly captured Bill Watterson’s style and humor – making us wish that these strips would continue in some manner.