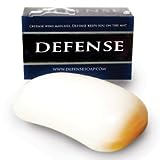 Every New Year, there are people who make casual New Year’s Resolutions that they hope to keep in order to better themselves (the traditional “stop smoking”, “exercise more”, and “spend more time with loved ones”), and then there are people like Richard Nikoley who believe in making a definitive lifestyle change for overall good.

It seems that Richard has decided to FREE THE ANIMAL within and make some dramatic changes to how he lives his life – things that may seem dramatic to others, that is.

You see, Richard has decided, among other things, to STOP USING SOAP AND SHAMPOO.

At one point in his life, Richard was over 33% body fat – so he decided to change to a paleo diet, and learned a few things along the way.  Things such as covering one’s skin with soap and shampoo does more harm than good.  So Richard just scrubs himself down with water a few times a day (saving anti-bacterial hand-washing soap in the kitchen, where he does follow basic food-safety procedures), and uses an anti-deodorant instead of an anti-perspirant/deodorant .  He shaves with a clipper, aside from one or two times a year when he goes crazy and shaves with actual shaving creme.

Richard and others who follow the “no soap” routine claim that their natural body scent smells better than one covered with fake soapy perfumes, and that hair quality looks and feels better than it does when stripped of natural oils by shampoos.

Perhaps ancient man… or the French… were onto something.

And since Web Watch knows that you’re going to ask – we’ll just fill you in right now.  A PALEO (or PANEOLITHIC) DIET is often called a “cave man diet” or a “stone age diet”, because you’re not allowed to eat anything that a cave man wouldn’t have available.   See how this ties into the “washing without soap” thing?  Cavemen didn’t have soap, and they seemed to do just fine.